Colonial factors of the Israel-Palestine conflict discussed at book launch 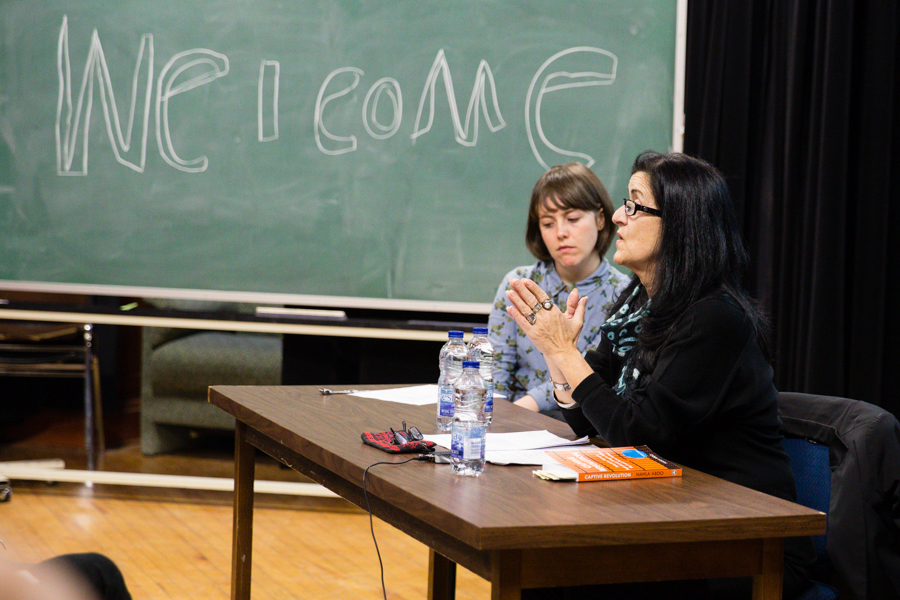 Co-sponsored by the Quebec Public Interest Research Group (QPIRG) McGill, the Centre for Gender Advocacy, Solidarity for Palestinian Human Rights Concordia, and Concordia’s Simone de Beauvoir Institute, the event was a part of Culture Shock, an annual series of events which, according to its website, is “dedicated to exploring the myths surrounding immigrants, refugees, Indigenous people, and communities of colour.”

Abdo, a professor of sociology at Carleton University, has published a number of other
works related to race, nationalism, and Middle Eastern societies. In Captive Revolution, interviews make up part of the primary research Abdo draws on to examine Israel’s treatment of Palestinian women imprisoned on political grounds.

Overlooked: women and the Palestinian struggle

The role of Palestinian women in the movement against Israel’s settler-colonialist policies, while of considerable significance, has been largely overlooked, Abdo explained. “To pay tribute to these women, to their struggle, to restore them in their proper place in the history of the Palestinian struggle – that was the aim [of this book].”

Abdo focused her presentation on the period from the 1960s to the 1980s, prior to the First Intifada uprising of Palestinians against Israeli occupation, noting that this time period was characterized by a proliferation of anti-colonial movements around the world. “There was a culture of resistance,” Abdo explained, “which was […] very much appreciated and learned by the [Palestinian] women who were part of the anti-colonial struggle.”

But what factors motivated – and continue to motivate – these women to join the struggle at the risk of their freedom and their lives? Too often, Abdo said, the true answer is misunderstood, and academics who do choose to examine the activism of Palestinian women misconstrue its causes.

“According to most of the literature – including feminist literature – in academia, Palestinian women did whatever they did because they were terrorists, or lacked implication, or had troubles with their religion, with their families, with their men, with their own patriarchy. And there is no mention whatsoever of colonialism.”

In fact, Abdo’s research has contradicted these claims. “The composition of the twenty women that I worked with was overwhelmingly secular,” she explained. “They all had great relationships with their families, especially with their fathers, and they all enjoyed growing up, and loved people in their own homes.”

One recurring theme among those interviewed was the collective memory of the Nakba, or the expulsion of hundreds of thousands of Palestinians from their homes before and during the Arab-Israeli war of 1948. “Most of these women […] remember stories from their parents, from their families, who were kicked out of their homes and of their land and became refugees.”

A number of them, said Abdo, cited a famous line by former Egyptian president Gamal Abdel Nasser: “That which has been taken by force can only be restored by force.”

Abdo explained that many interviewees had witnessed acts of Israeli brutality at a young age, and that these experiences had later spurred them to resist. “When you live under colonialism, it is almost impossible not to become involved in freeing yourself.”

One issue central to Abdo’s book was the treatment of Palestinian women within Israeli prisons. Those interviewed described undergoing physical, psychological and, in some cases, sexual torture. Some women described being forced to listen for hours to the screams of other detainees before undergoing their own interrogation, while others watched their own mothers being tortured to encourage them to confess to terrorist activity. Abdo explained that in every case, detainees’ families had been targeted by Israel, and their homes destroyed.

Abdo stressed, however, that the women she interviewed did manage to resist their imprisonment. Educational lectures were given by prisoners on various topics, plays were put on, and detainees worked together to organize group activities and whatever small demonstrations of defiance they could get away with.

“These women struggled for every single right,” she said, adding that they achieved some notable victories. At one point, detainees coordinated a massive hunger strike to protest being forced to make uniforms for the Israel Defense Forces, eventually succeeding.

Speaking to The Daily after the event, Rula Abisaab, Associate Professor of Islamic History at McGill, highlighted the significance of Abdo’s work in calling attention to a relatively little-known issue. “To throw light on the women is crucial. There have been lots of studies, and even memoirs by Palestinian male prisoners, but not women.”

Abisaab also underlined the necessity of challenging the ‘colonial approach’ of certain feminist academics in the West. “We need more studies like this,” she said.

Scott Weinstein, who also attended the event and is a member of Montreal’s Independent Jewish Voices organisation, also praised Abdo’s work. He stressed the importance of holding events such as this one at a time when, all over North America, voices speaking out in support of Palestinians have been silenced, or falsely labelled anti-semitic.

Concerning the brutality described in Abdo’s book, Weinstein said, “This has been done in our name as Jews, and not only is it an affront especially to the Palestinian people, but it’s a sabotage of the Jewish experience. We, who for centuries have been struggling against oppression, are now becoming the oppressors.”