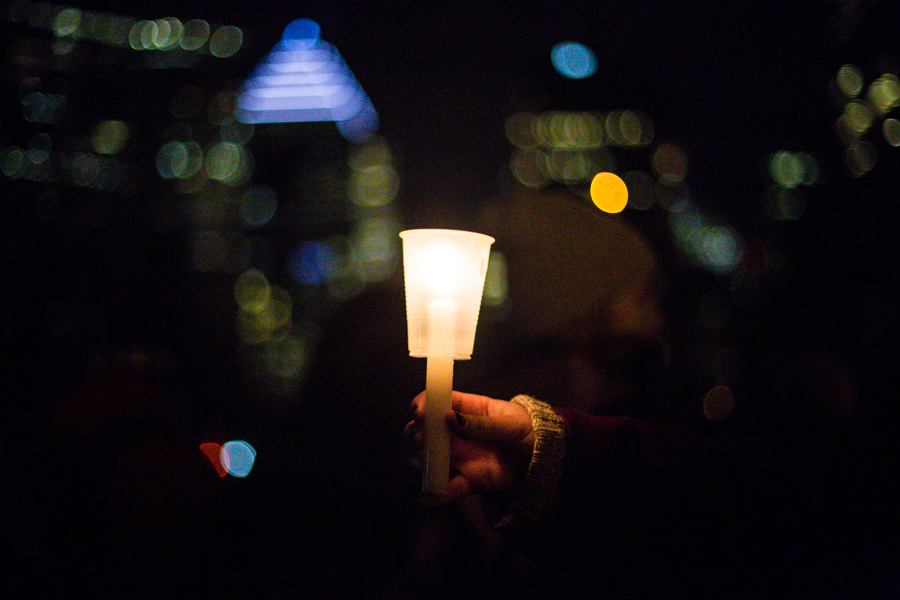 Members of the McGill community gathered on Tuesday evening at Lower Field to express their solidarity with the ongoing demonstrations in Ferguson, Missouri, and to mourn Michael Brown and other victims of police violence against racialized communities.

The event followed the November 24 announcement of a grand jury’s decision not to indict police officer Darren Wilson for the fatal shooting of Brown, an unarmed black teenager, in August. The news sparked a wave of popular outrage, and hundreds of thousands of people have taken to the streets and social media to protest the decision. Monday night’s demonstrations in Ferguson saw violent police repression, with heavily-armed police tear-gassing protesters.

The hour-long candlelit vigil, organized by the McGill Black Students’ Network (BSN), drew nearly 1,000 attendees from the McGill and Montreal community. Solidarity rallies took place in many other Canadian cities, with around 2,000 participating in Toronto and hundreds in Ottawa and Calgary.

“In light of the recent verdict not to indict Darren Wilson, and the death of Mike Brown, BSN is basically just creating a space […] to make an address and allow people to express their love for Ferguson and […] their support to the ongoing efforts [there],” said BSN VP External Maya Taylor.

Indeed, the atmosphere at the vigil was subdued, with people talking quietly or simply standing in contemplative silence.

“I have a 12-year-old nephew in Washington, D.C.. […] My mother is there, my siblings are there, my nephew is there, and there’s nothing telling me that they will still be there [when I get home].”

Speaking to The Daily anonymously, several of those present shared their frustration with the systematized racial inequality in American society, and spoke to an urgent need for positive change.

“I think that everyone feels wrong about this,” said one student. “This shows us that our justice system isn’t reflecting our moral values […] because if this is such a huge thing […] then obviously the laws aren’t reflecting what the public wants.”

“I’m from America,” said another. “We had 250 years of slavery, we had 60 years of Jim Crow in the South, our parents were born and there was segregation, and people in our country – people that I went to high school with – don’t believe that they have any privilege; [they believe] that they have equal opportunities with African Americans in our country. That’s pretty dumb.”

Shortly after the gathering began, executives from BSN, as well as other campus organizations such as the McGill African Students Society and the Caribbean Students Society addressed the crowd. In a series of emotional speeches, they expressed the groups’ profound grief and disappointment with the grand jury’s decision, and urged those assembled to remember that Michael Brown’s shooting was not simply an isolated incident.

“It is important for all of us here to realize that these instances of injustice are not isolated to Ferguson, Missouri, or to the U.S., but are seen and experienced by black people and other visible minorities within our geographical borders,” said one executive, prompting applause from the crowd. “We are here to declare that black lives matter […] and to pay our respects to all of our fallen brothers and sisters.”

After the organizers’ speeches, a brief list of black victims of police violence was read aloud, followed by four minutes of silence.

Before the gathering dispersed, a number of other students addressed the group to share feelings of grief, messages of encouragement, and poetry. Many of those gathered joined in singing “Amazing Grace” in memory of Brown as well as North America’s countless other victims of racial oppression and violence.

“It is important for all of us here to realize that these instances of injustice are not isolated to Ferguson, Missouri, or to the U.S., but are seen and experienced by black people and other visible minorities within our geographical borders.”

One student, speaking anonymously to the crowd, stressed the importance of acknowledging the fear that the grand jury’s decision had awakened in many.

“Last night, while everyone was watching the live cast […] I just stood there in front of the screen and cried,” the student said. “I have a 12-year-old nephew in Washington, D.C.. That is one of the most concentrated populations of black people in the U.S.. I honestly don’t want to go home for Christmas. My mother is there, my siblings are there, my nephew is there, and there’s nothing telling me that they will still be there [when I get home].”

“I just want to say that this moment here is the proudest I’ve ever been to be a McGill student on this campus,” said another speaker. “To see people of different backgrounds, different colours, different beliefs, all gathered here to say that oppression is wrong wherever it exists is a very powerful message.”