The Enbridge Line 9B protest was necessary and brave 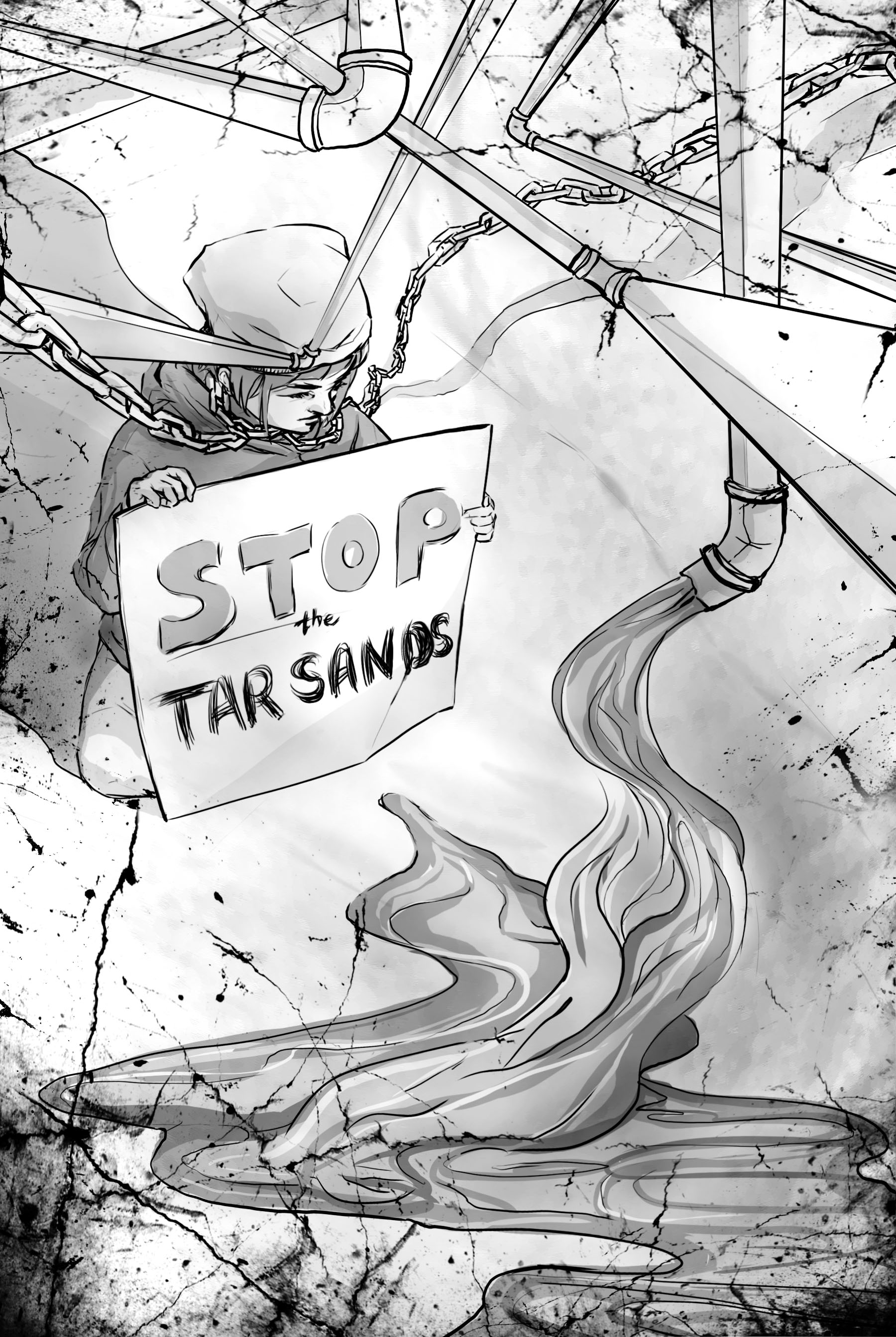 On October 7, four activists chained themselves to the gates of Montreal headquarters for Enbridge Inc., an energy pipeline company. The activists were protesting the reversal of the Enbridge Line 9B, which will carry tar sands oil from Alberta through Montreal for eventual exportation. Police officers were on-site and proceeded to physically remove the protesters from the premises. One of the four protesters had placed a chain around her neck, and police officers were required to use a small saw to remove the bicycle lock around the chain without causing her harm. This is the most recent act of resistance against Line 9B and the tar sands. Community organizations, human rights and social justice groups, and individuals have previously spoken out extensively against the Line 9B project, to no avail. Opposition has been suppressed and ignored, leaving individuals little choice but to resist through direct action and civil disobedience.

Alyssa Symons-Bélanger, one of the four protesters, explained in a press release that the action was their last resort “because there are no other means for [their] voices to be heard.” According to Symons-Bélanger the protesters “want to send a clear message to oil companies and to the Harper and Couillard governments: the residents of Quebec are opposed to the transportation of the tar sands and are calling for an immediate halt to their extraction.”

The protest was more than justified: there is substantial evidence regarding the risks associated with tar sands pipelines. Pipelines carrying tar sands oil (also known as crude oil) are more likely to spill than those carrying conventional oil. The 38-year-old pipeline that now carries ‘normal’ oil through Quebec and Ontario will be reversed to carry heavy crudes, something for which the pipeline is not equipped.

The Line 9B project is predicted to lead to a 30 per cent expansion of tar sands extraction. Undeniably, greenhouse gas emissions from the tar sands are a major environmental issue.

Moreover, resistance to the pipeline extension project stems from deeply-rooted opposition to the exploitation of tar sands as a non-renewable energy source. Mining of tar sands releases at least three times the CO2 emissions as regular oil production, and in Canada, it’s the “[fastest] growing source of greenhouse gas emissions,” according to ForestEthics, a grassroots environmental organization. The Line 9B project is predicted to lead to a 30 per cent expansion of tar sands extraction. Undeniably, greenhouse gas emissions from the tar sands are a major environmental issue.

There are other worries. Greenpeace Canada is among the many prominent environmental organizations working to raise awareness about the impact of tar sands oil, but the organization also campaigns on the “social and health costs of the tar sands.” With pipeline development comes the destruction of the traditional lands of Indigenous communities, housing crises precipitated by an influx of oil workers, and a spike in rare cancers among people living in affected areas. Enbridge also has a history of environmental damage and dishonesty that is incredibly troubling. ForestEthics writes of how a leak was discovered by an Inuit hunter in the Northwest Territories, only to be dismissed as a “pinhole” leak by Enbridge. This leak is now estimated to have released over 1,500 barrels of oil.

The measures adopted by the federal government to consult public opinion over Line 9B were clearly geared toward restricting the public’s participation. The National Energy Board, an independent economic regulatory agency that regulates the construction of oil and gas pipelines, approved the project using an undemocratic process designed to silence dissent. The Conservative government put in place a stringent set of rules and requirements, effectively only allowing specialists or those directly affected to be heard, for the alleged purpose of speeding up the consultation process. Furthermore, people who lived near the proposed pipeline were only allowed to submit letters of dissent, and were only given two weeks to do so.

There comes a time when civil disobedience is not only acceptable, but necessary. That time is now.

So far, several municipalities along pipeline routes have expressed environmental concerns and over hundreds Indigenous nations have declared their firm opposition tar sands exploitation. Indigenous nations in British Columbia have ratified the “Save the Fraser Declaration,” in which they state, “We will not allow the proposed Enbridge Northern Gateway Pipelines, or similar Tar Sands projects, to cross our lands, territories and watersheds, or the ocean migration routes of Fraser River salmon.” The declaration further states that the signatory nations “will not tolerate this great threat to us all and to all future generations.”

What this shows is that opposition to the tar sands project is extensive and well-organized, but mostly ignored. A spokesperson for Enbridge responded to the action in Montreal by stating that “three protesters who break the law to make their point [do not] represent the people of Quebec” and that “the public review of Line 9B [in Quebec] was extensive, open and thorough.” If the public review were as extensive, open, or thorough as the spokesperson insists, then the Indigenous nations, human rights and social justice groups, as well as individuals’ opposition to the project would have been taken into account – Line 9B was approved despite fierce resistance from a varied demographic. In light of the government’s disregard for this resistance, civil disobedience and direct action is fully justified. In fact, there comes a time when civil disobedience is not only acceptable, but necessary. That time is now.

Not only did the Montreal protesters cause a disturbance, the action generated media attention, which is crucial in raising awareness of the destructive consequences of Line 9B, as well as reviving the public’s interest. This media attention is particularly necessary given the scarce coverage of the issue in the past months. It also sends a clear message to those in charge that opposition to the pipeline will not be silenced. Critics of direct action argue that there are other means of demonstrating opposition and that civil disobedience is a threat to the democratic process. What these critics fail to realize, however, is that democracy is sustained by opposition and scrutiny, and that our leaders must be challenged when they do not protect our collective interests. An informed public is also a pillar of democracy, and raising awareness about the pipeline projects is of utmost importance.

As citizens, we have an obligation to follow the law, but only insofar as the law does not oppress and endanger individuals. In that case, we have a moral obligation to resist.

Therefore, the protesters’ actions were not premature or irresponsible in any way, as they resorted to direct action after their opposition was repeatedly overlooked by the authorities that approved the project, to the detriment of our environment and health. Critics of civil disobedience argue that it is nothing but law-breaking and does not yield concrete results, as stated above by the Enbridge spokesperson. However, some of the greatest civil rights movements in history employed this tactic and affected profound and widespread change. Rosa Parks disobeying unjust public transportation laws is an example of successful civil disobedience.

As citizens, we have an obligation to follow the law, but only insofar as the law does not oppress and endanger individuals. In that case, we have a moral obligation to resist. The Enbridge pipeline reversal project endangers our safety and our environment. With all this at stake, the courage and initiative of these activists should be applauded.

An earlier version of the article implied that Indigenous nations signed the Fraser Declaration in opposition to pipeline 9B. In fact, these nations opposed the Northern Gateway pipeline in northern British Columbia. The Daily regrets the error.

Fatima Boulmalf is a first year in the Med-P program. To contact her, please email fatima.boulmalf@mail.mcgill.ca.