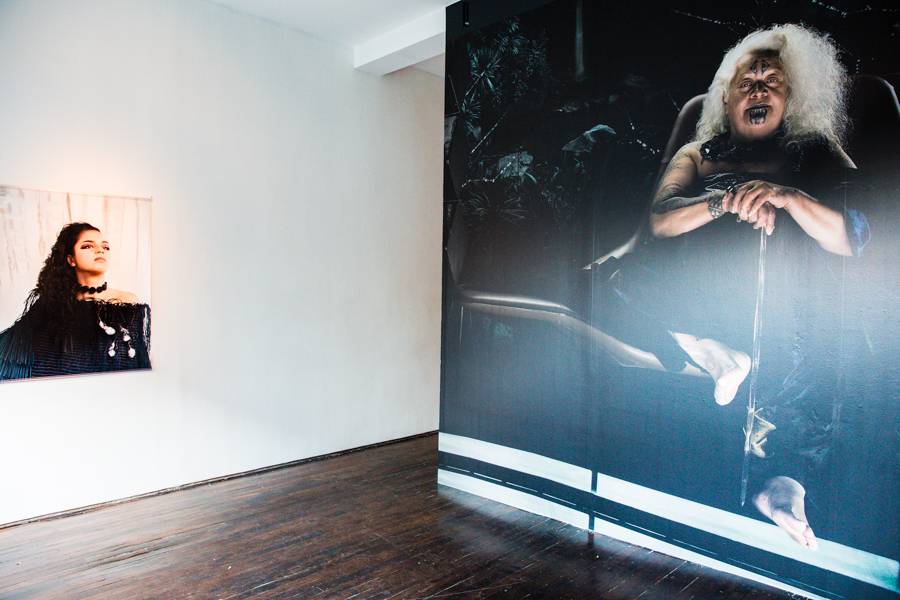 HTMlles, Montreal’s feminist festival of media arts and digital culture, doesn’t officially begin for another two weeks, but Lisa Reihana’s recently opened Mareikura is a taste of what’s to come. Hosted at the artist-run centre articule, Mareikura is a multimedia exhibit addressing Indigenous representation in a colonial context. It is the first Montreal exhibit from Maori artist Reihana, and presents her reflections on the sovereignty of New Zealand’s Indigenous Maori population.

Reihana’s depiction of Maori people blends historical communities, traditional rituals, and mythology throughout the exhibit. Upon entering the exhibit, a photograph catches the eye: a Maori mythical figure sits in a black throne, holding a cane. The man has disheveled white hair and a black cloth covering his body, the sparsity contrasted by a look of intense concentration on his face. His image and posture exude a self-assertiveness that challenges our perception of mythological figures – his presence is tangibly real and in no way imaginary.

In the dark room that follows, a multimedia video clip grabs and plunges the viewer into a New Zealand landscape – mountains, water, and blue sky. The clip presents a panoramic view, slowly rotating 360 degrees.

Here, Reihana’s work is an attempt at encompassing every degree of daily life in a historic Maori community.

Young women dance with flowers in their hair. A small group of people dressed in colourful long coats and feathered hats sit on the grass, occupied with talk, while in another scene large muscular men fight nearby, pressing their heads against each other. A woman with her back turned to the viewer addresses her song to the ocean, as if waiting for a reply. Finally, the slices of life turn sinister, as a sound from the water prompts a group of Maori men to start attacking intruders, invisible to the viewer. They shout and soon gather to protect their land.
In this video, Reihana subtly exposes a plethora of the quotidian details of Maori life, paying close attention to body language and expressions. Every individual has a distinct ta moko (body tattoo), and distinct clothing, headgear, and demeanour. The men fighting each other tend to wear little clothing, whereas the people who engage in meditating activities, like singing and sitting in a circle, are dressed in cloaks made of animal skin. The lack of narration in the video prevents a reductive understanding of the people’s identities and their world of traditions – what you see is what you get.

In another wordless clip, a woman sings in a long black dress against a black backdrop. The movement of her lips indicates the act of singing, but her song cannot be heard. Only her sentiment can be read in the way she moves to her song – she smiles, but there is sadness in her face. Her performance then intertwines with a clip of a golden-blue bird slowly flapping its wings, and the woman begins to echo the bird’s movements, as if hoping that her song can fly across horizons to be heard by all. Her movements mimic mythical figures, but her expressions ground her in reality. In this representation, Reihana shows what Maori traditions mean to Maori people. The sadness in this woman’s presentation indicates a desire that these traditions not be lost or misrepresented. Reihana demonstrates the need for colonized voices to be heard.

In her representations of Maori life and traditions, Reihana reclaims self-determination throughout the exhibit, turning to the historical roots of Maori self-expression. The oppression of Indigenous cultures and voices that has occurred for hundreds of years has resulted in widespread, reductive standardizations of these cultural identities today. Lisa Reihana’s multifaceted, multi-layered representation successfully challenges flat portrayals and complicates the often simple, one-dimensional depictions of Indigenous voices.