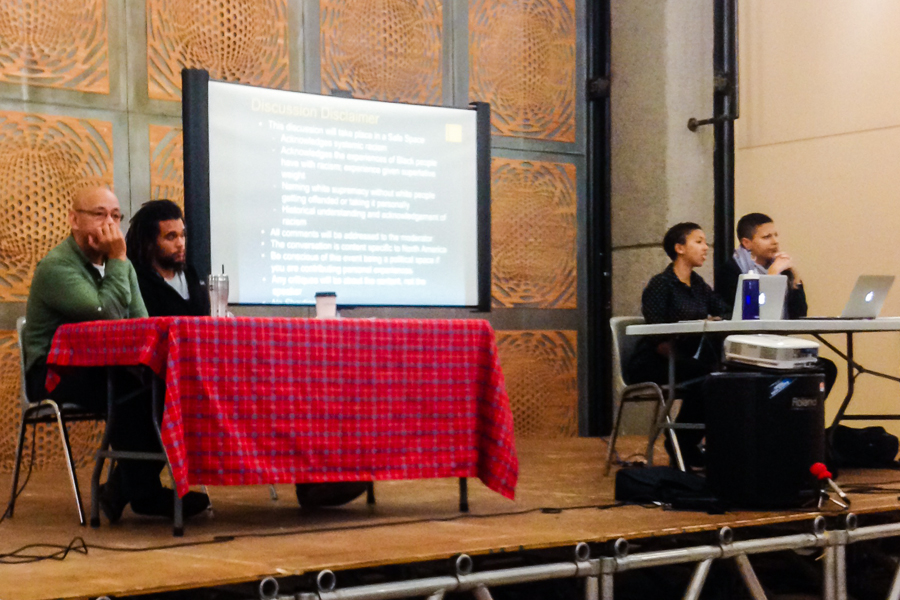 On October 3, McGill’s Black Students’ Network (BSN) collaborated with Midnight Kitchen to host a panel discussion on issues of police brutality and race, with a particular focus on recent events in Ferguson, Missouri. The panelists were Rachel Zellars, a PhD candidate at McGill in education working on critical race theory; Kai Thompson, an undergraduate student with volunteer experience in various community and youth organizations; Fo Niemi, the executive director of the Center for Research-Action on Race Relations (CRARR), and Trineka Geer, a political activist who recently spent time in Ferguson.

The Ferguson protests were sparked by the fatal shooting of Michael Brown, an unarmed black teenager, by the white police officer Darren Wilson on August 9. In the intervening weeks, there has been an international outcry, not only against the systemic racism colouring the official investigation of this crime, but also against a larger pattern of racial violence against black Americans. In a Skype interview with the panel, Geer shared her first-hand experience with the ongoing protests in Ferguson.

Geer described the “disregard for black lives [in Ferguson],” and highlighted the discriminatory behaviour of officers who target people of colour with a disproportionate number of fines and arrest warrants.

“We know that there are certain streets in Ferguson that you don’t walk down, that you don’t drive down, because […] you’re going to be assaulted or harassed by the police,” said Geer, quoting a young black resident of the town.

“It creates a way for the police to be able to control the movement […] of young black men and women in this community,” Geer told participants, adding, for example, that “as people are going to vote, they’re being accosted for no reason […] by the police, and arrested.” These forms of discrimination deny adequate representation to Ferguson’s black community within the legislative and judicial bodies that govern the town, she explained.

“So Michael Brown was really the straw that broke the camel’s back,” said Geer.

Following the interview, the other panelists explored various topics connected to the overarching theme of police brutality and race. These included a summary of the function of police in society and the history of law enforcement in Canada, an analysis of the process of police militarization in both the U.S. and Canada, and a number of case studies of incidents of racial violence perpetrated by North American law enforcement officers.

Several speakers called attention to Canada’s own history of violent discrimination against people of colour, noting that many Canadians are, in fact, unaware of this history. Zellars pointed to the long-established existence of white supremacist organizations such as the Ku Klux Klan (KKK).

“The United States, of course, has a glorious history involving the KKK, but Canada has its own history,” said Zellars, going on to discuss collective misconceptions of Canada as a nation that has always been a haven of tolerance for racial minorities.

Thompson elaborated on this issue, explaining that, while many students are aware of the disproportionately high number of people of colour who face imprisonment in the U.S., most don’t realize that the same imbalance exists in Canada’s prisons. “It’s not just about delegating this history […] to the States,” he said. “In Canada […] black people, Aboriginal people, and racialized people in general are disproportionately incarcerated, and we can look at that as a form of state-sanctioned violence.”

Niemi also contributed to the discussion of this issue, sharing insight into the racial profiling routinwely carried out by Canadian police forces and the institutional barriers in Canada’s judicial system that work against racial minorities. “Slavery’s still there, just in a different form,” he said.

When the panelists had finished speaking, the floor was opened up to the audience, many of whom had insights of their own to share. The ensuing debate covered a wide range of topics, from social media campaigns inspired by the Ferguson protests to respectability politics – which promotes conformity to white supremacist standards without questioning them – and how to move beyond it.

Participants discussed the value of social media as a means of participation in human rights movements. Networks like Twitter and Facebook can help to spread awareness, people agreed, but as one participant said, they can also encourage ‘slacktivism’ – the perception that “liking a video, sharing a video, buying a t-shirt […] is enough.”

“How do we stop people from becoming apathetic, and how do we […] retain the potential social media does have as such a powerful tool for social activism?” asked BSN VP External Maya Taylor.

Response to the discussion panel was very positive. “I thought it was definitely a healthy dialogue, definitely constructive,” one participant told The Daily.

“I thought, in particular, that the discussion about social media and just how we can […] keep engaged […] that was something I’d been wondering about before, and it was really awesome to see it talked about in a larger context,” added another.

For the BSN executive team, the event was a success. “I’ve been in BSN for three years and […] this was one of the most substantial discussions we’ve had,” said BSN Co-President Samanthea Samuels.

“I feel really good about how this went,” added Taylor. “I’m confident that these people […] will continue talking about this amongst their friends, will pass on this information, so I think it went really well.”

BSN Political Coordinator Isabelle Oke told The Daily what she hoped people would take away from the discussion. “Yes, this kind of oppression is systemic and institutionalized, and that can definitely be overwhelming at points. I think something people need to concentrate on is how they fight white supremacy […] on an individual level.”