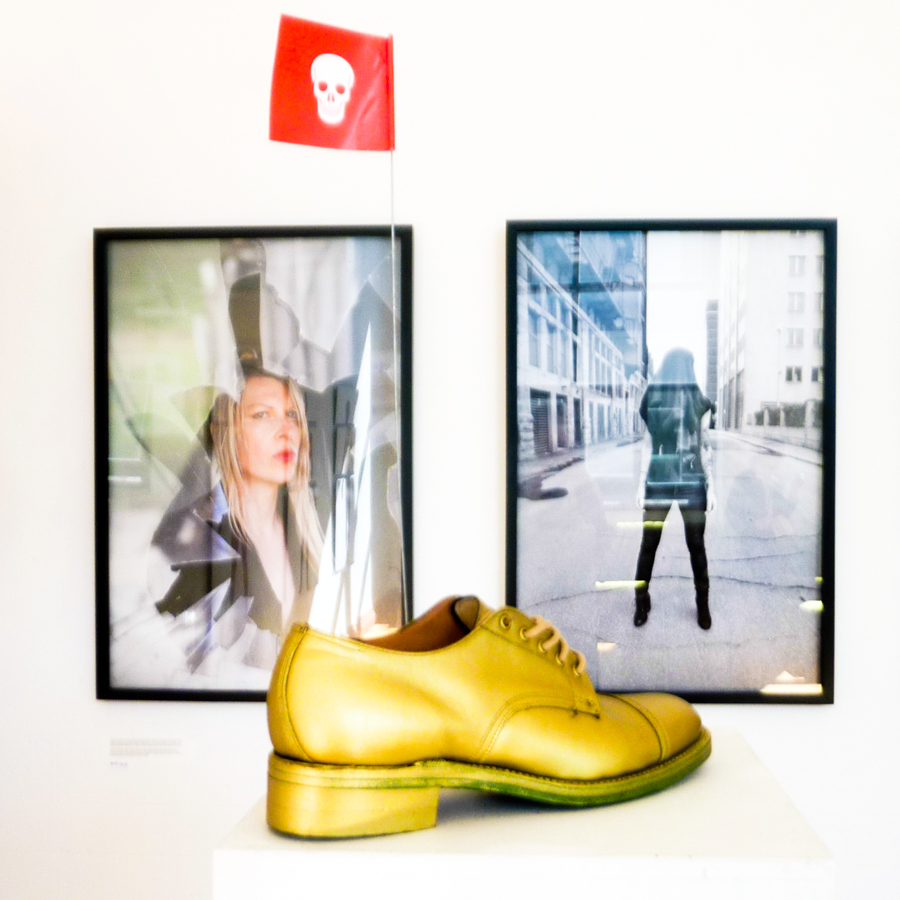 Montreal’s gallery L’Espace Créatif played host last week to artists from around the world, as they converged for the landmark exhibit “Trans Time.” Curated by Ianna Book, in collaboration with Marie-Claude G. Olivier and Virginie Jourdain, “Trans Time” is the first collective trans exhibition in Montreal. Book describes the exhibit as “a space of visibility bringing together local and international trans* artists.” It is indeed a powerful space, with each artist highlighting their own vision of trans culture and their own story.

Leon Mustovoy’s work is the most immediately striking upon entrance, depicting various body images that clash with the stereotypes in our minds. The large portraits use images of parts from three different bodies to construct one whole human being. This does more than break gender binaries; it questions our grouping and combining of gender, sex, sexuality, presentation, and attraction, among other heteronormative expectations.

JJ Levine’s photo series Alone Time also disturbs these binaries in a less immediately noticeable but ultimately more powerful way. On first glance, the series it seems to depict heterosexual couples sharing moments that are both intimate and quotidian. After closer inspection (or maybe after reading the artist’s description) it becomes apparent that each photo is two separate photos of the same model, portraying both halves of the relationship and two sexes. According to Levine, the piece’s purpose is to demonstrate “an individual body’s capacity to engagingly and believably embody two genders,” hence questioning “the mainstream depiction of binary gender roles.” In this, Levine succeeds entirely, challenging the viewer’s assumptions and displaying the fluidity of gender expression. Though intimate, the photos come across as slightly staged, a reminder that binary gender roles are as construed and filtered as the photograph itself.

While they are the exhibit’s focus, gender stereotypes are not the only issues addressed in “Trans Time.” Golden Shoe, whose artist is not clearly identified, tackles colonialism and privilege through interactivity. The piece, a golden shoe and a small red flag with a skull upon it, also included a performance aspect, where one participant put on the shoe and stepped on another participant’s neck in an act of oppression. The performance, however, is not necessary to give the piece meaning – the message of Golden Shoe is just as strong from where it sits innocently on its pedestal, shining quietly.

The Number Project (another piece without a clearly labelled artist) also diverted from the exhibit’s themes, bringing to it a historical consciousness. Playing from a TV on the floor of the gallery, the project is a video that shows the artist branding themselves with the same number their mother had in Auschwitz. Its impact is immediate and provocative. Does this rebranding perpetuate the crime? Or, as an aware and individual choice, does it honour the original, unwilling recipients of the tattoo?

These two pieces, along with Nothing Comes In, Nothing Goes Out by Zahra Farhan and Claude Wittman, are the only ones that do not directly address trans issues, linked thematically instead by the fact that the artists themselves are trans. These off-topic pieces do not, however, detract from “Trans Time” – the purpose of the exhibit is to make trans artists visible. This does not mean that their work should be confined to trans politics. Indeed, they relate to the rest of the exhibit in that they portray other systemic means of oppression, conveying themes of intersectionality and suggesting that identifying as trans does not need to define one’s identity. Nothing Comes In, Nothing Goes Out is a tiny scrap of paper upon which both Farhan and Wittman drew when they met in the prison where Farhan is today. The piece of paper is so small because Wittman had to smuggle it out without being caught, tangible evidence of the marginalization of trans artists’ voices, even though the piece is not explicitly about gender.

Downstairs, the exhibit displays various films. Most memorable is the story of Bob and Candace, in which a psychoanalyst narrates the characters’ everyday lives in black and white film. The psychoanalyst, after describing Bob and Candace, goes on to warn the audience that they are in fact “invisible monsters” and not who they appear to be – they are “transsexual.” This film, while stylistically indicating that it’s set in the past, still feels all too relevant. The words of the psychoanalyst linger in the air, long after the film finishes.

This is the importance of exhibits such as “Trans Time”: presenting alternative narratives of trans people. By giving space to the work of trans artists, the exhibit helps to debunk the oppressive societal dichotomy between ‘normal’ and trans. On their own, each individual piece from these international artists is striking and thought-provoking. Together, they make visible a community.