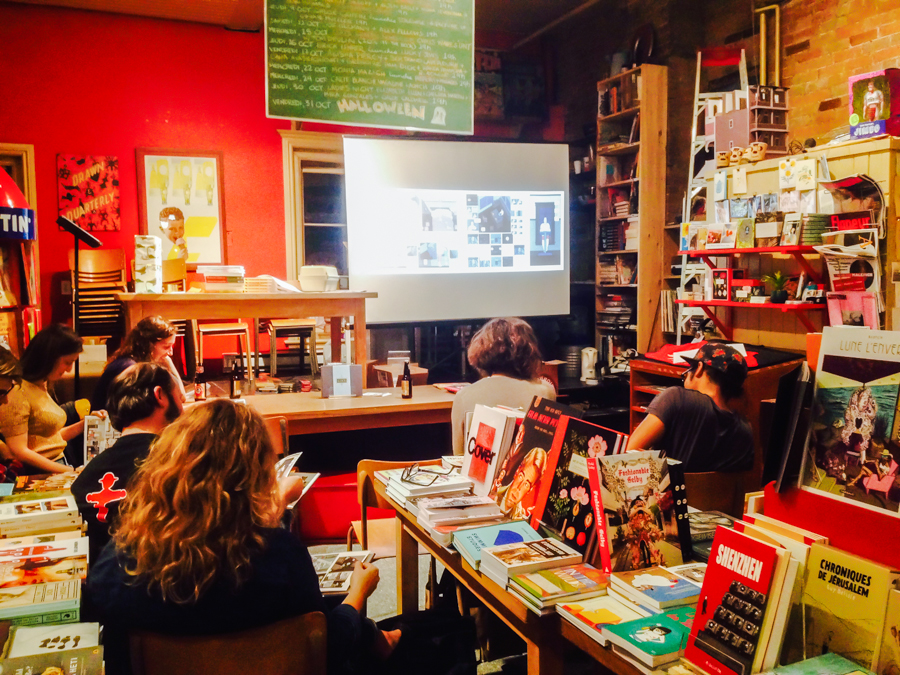 “Do we have beer? I should get beer.” Drawn & Quarterly’s creative director, Tom Devlin, seemed nervous as he set up chairs around a table in the back of Drawn & Quarterly’s storefront. The Mile End shop is small and packed to the ceiling with books, the wood decor giving it a warm and cozy atmosphere. Once a month, this store holds Montreal’s only publicized graphic novel book club. Devlin stopped to chat with me before heading to the dep to grab some beer for the gathering.

The book club was the idea of associate publisher Peggy Burns, said Devlin. “Because we have the comics identity here, she wanted to bring that to the floor,” he explained. Drawn & Quarterly specializes in comics, known throughout the city for their artistry. Devlin added that “comics are not often ‘book-clubbed,’ so we wanted to explore that a bit.” Each month the club picks a new book to discuss, with every gathering led by a different employee.

In literary circles, graphic novels have typically had a bad reputation, often falsely equated to superhero comics or newspaper cartoons. Their visual elements, however, add a level of analytical sophistication that simply can’t be achieved in prose or poetry. Unlike serialized comics and cartoons, they are full-length novels with mesmerizing art that takes the place of a hefty word count. However, illustrations are associated with simplified reads and children’s literature, readers often overlook graphic novels.

Devlin came back to the store with a case of St. Ambroise Pale Ale and slowly, other people started trickling in. There was no obvious common characteristic between all the participants; one attendee was a high school teacher, another a university student. A middle-aged francophone woman arrived late, while a younger woman came in carrying groceries. Everyone nursed a beer, timidly. Our group numbered a total of nine.

According to Devlin, the club “tends to be different crowds for each book, instead of the same handful of people every time. It’s anywhere from six to fifteen people, depending on the difficulty or popularity of the book.”

Devlin chose Chris Ware’s graphic novel Lint to read for this book club. Little handouts on the table described the comic as “one of the chapters of Ware’s ongoing Rusty Brown saga (ACME Novelty Library), Lint [is] a stand alone graphic novel focusing on Rusty’s bully, Jordan Wellington Lint. Each spread of the book is a year of Jordan’s life, from birth to death.”

A projector was set up so that the group could examine the pages together. Devlin began the discussion, giving background on the ACME Novelty Library series, pointing out stylistic choices by Ware and commenting on the disorder of the panels and how they draw a reader’s eye, unlike the conventional paneling style of Archie or Batman. Tentatively, other members of the group offered opinions. By the third page spread, everyone was commenting on the colour scheme, the emotions of the design, and the story that Ware was trying to express. I was shy at first. My first comment, pointing out the way the colours and layout of one spread mimicked a previous spread, received an appreciative response, with some members remarking that they hadn’t noticed this themselves. Awkward at first, the atmosphere became gradually warm and encouraging as thoughts were shared and beer was consumed.

Devlin mentioned to me that he does his “own personal book club with just cartoonists, so we can talk really hardcore, nerdy stuff.” But the details and interpretations that our haphazard group discovered were already astounding, allowing for an understanding of the novel that would be hard to reach independently. The novel’s narrative is introspective but unreliable; it follows the altogether mundane and rather pathetic life of Jordan Lint, a bully, through his own memories, which ultimately prove to be untrustworthy and subjective. Devlin saw the story as a way for Ware to get back at his own bullies by giving them a story so boring and morally reprehensible that even pity could not be felt for them. Another member of the group saw Lint as a story about the “big moments” in our lives and how they become warped in our memories, sometimes changed to omit our own misgivings. Someone else pointed out that the cycle of abuse shown in the story could easily be false memories, fabricated to create a sense of victimization. Nine strangers in the back of a bookshop fleshed out more insight from a graphic novel than I’d seen discussed in university lectures on The Aeneid.

The literary world could probably benefit from a few more back-shop graphic novel book clubs like Drawn & Quarterly’s. With graphic novels, you get to interpret a story not just through plot and dialogue, but also visual imagery and colour palette. Interested in art? This club will show you a unique narrative style of art. Interested in literature? This club will expand your knowledge in an up-and-coming genre. Even for those who already spend all their time talking about books, it’s important to step off campus every once in awhile and have an in-depth discussion that doesn’t affect your GPA.

Drawn & Quarterly’s next graphic novel book club will be discussing Lynda Barry’s One Hundred Demons. The club starts at 7:00 p.m. on November 12 at their Mile End shop.