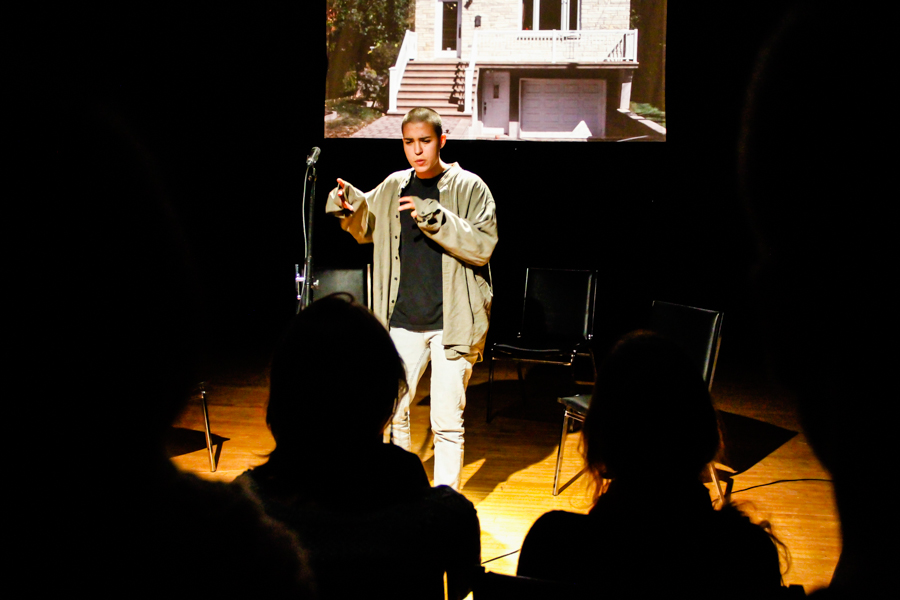 This frequent refrain of the narrator in Tuesday Night Cafe Theatre’s Monster is not directed at himself or at any other character, but at the audience before him. Monster, co-written by Daniel MacIvor and Daniel Brooks, is a play about discomfort – its goal is to make all audience members writhe in their seats, forcing them to face characters far more sinister than just “assholes.”

Co-directed by Laura Orozco and Dilan Nebioglu, Monster is a one-woman show that sees Orozco embody a wide range of characters, from a drug-addicted aspiring filmmaker to a peppy aspiring mother, as well as the narrator, Adam, who tells each character’s story.

The characters all have their own demons to confront – alcohol, abuse, trauma. This show is not, however, a character study. Instead, Orozco’s narration and characters explore the hidden truths of the human spirit that push people to the edge. When the recovering addict relapses, he discovers he is the most himself that he can be. When a teenage boy recounts the story of a murwwder that occurred next door, he becomes obsessed, disappearing into the story. The stories all feature a recurring image: a young boy chops up his father with a saw, while the sixties classic “Raindrops Keep Fallin’ On My Head” plays in the background.

Monster unveils the darkest elements of the human character as told by the narrator, who is the angriest of all.

Orozco’s portrayal of these tortured characters is powerful and playful. She easily steps in and out of their various disturbed psyches, never breaking character. Her acting truly shines when the play allows her to portray one character at length, as she does when telling the stories of Joe the addict and the unnamed teenage boy. These two characters become multi dimensional – the audience gets to see their quirks, their excitement, their pain, and can therefore better understand what plagues them.

The other characters, such as the unhappy couple Al and Janine, are ironically more central to the plot but less strongly portrayed, coming off as caricatures or tropes. In particular, Orozco’s portrayal of Adam, the narrator, lacks nuance. Perhaps Orozco intentionally seeks to present Adam as a figure of pure anger, but this nonetheless makes him less captivating.

The intensity of each of these characters is reflected by the set choices: five identical black chairs form a semicircle, with a microphone in the middle of the stage. The microphone is used by Adam when he breaks the fourth wall and addresses the audience, while the other characters use the chairs to tell their own stories. Behind the chairs, a projector screen displays slides of background images throughout the show. The effect of switching from slide to slide serves as a clear distinction between characters and stories, while still linking them together in one large slideshow.

The only time that the show deviates from this simplistic set is when Orozco takes on the only role in the show that is not battling some inner demon: that of a former filmmaker who denounces the senseless violence of the boy who cuts up his father. For this character, Orozco sits in a rocking chair off to the side of the stage and dons glasses for the sole costume change of the show, making it clear that this character does not belong. This contrast is a brief reprieve from the darkness of Monster, emphasizing the utter grittiness of the rest of the show.

As the stories of Monster unwind, audience members may find themselves wondering what the point is. For some time it seems that the story isn’t going anywhere, that it’s simply a series of unfortunate events and people, punctuated by an angry narrator.The ending, however, brings it all into perspective. It becomes apparent that the stories are not only unfolding but intertwining, and Adam the narrator becomes more than just pure anger – or rather, Adam’s pure anger becomes the product of these stories. The conclusion is a revelation that will leave the audience deeply unsettled.

In an Alcoholics Anonymous meeting, Joe the addict tells the story of a film he would like to make. When describing his film, he explains that it’s a love story where the female lead is played by both Uma Thurman and Yasmine Bleeth because, hey, “everyone is two people – at least two people.” This simple line, casually thrown in, reveals the genius of Monster.

In representing the traumas of many people, the story also represents the many traumas that one person can have, suggesting that we are all addicts, and we are all, somewhere inside, craving revenge.

TNC’s Monster leaves you with chills down your spine and a lot to think over; audience members may never be able to listen to “Raindrops Keep Fallin’” the same way again.