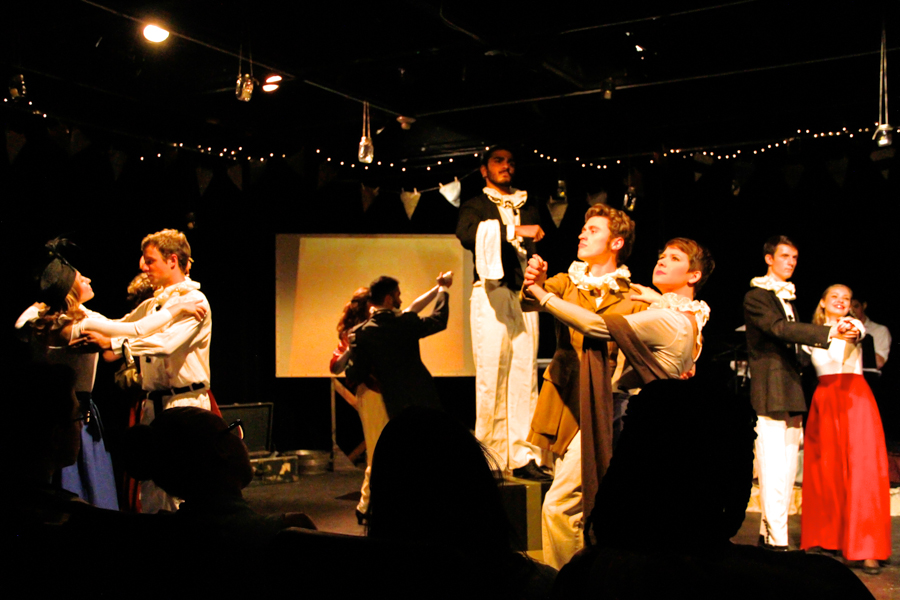 Musical epic meets witty satire in the Players’ Theatre production of Joan Littlewood’s Oh, What A Lovely War! Through song and sarcasm, over-the-top characters retell the story of World War I, highlighting the horror and absurdity of history’s so-called proudest moments.

In vaudevillian, circus-like style, the actors arrive onstage as a Pierrot troupe, a style of travelling entertainment popular in early 20th century England. The troupe’s members take on different voices, often of soldiers or clueless diplomats, to narrate the moments leading up to and during the war.

Though the play’s subject matter is serious, it treats the war as a humourous satire. The humour often centres on cultural stereotypes, such as high-strung Brits or haughty Frenchmen. These absurd caricatures are overplayed with nearly flawless comedic timing which adds to the contagious onstage energy. Some actors effortlessly speak in French and German, while others pull off quite the impressive range of British, Russian, and Austrian accents. This renders the characters more believable, momentarily drifting away from satiric comedy to ground the show back in the harsh reality of its original context. When Connor Spencer, the show’s director, talked to The Daily about the talent onstage, she explained that she was looking for actors with “a willingness to play.” The growling British commander, played by Anni Choudhury, particularly stands out. Choudhury abandons all restraints and embodies every inch of this explosive character.

This playfulness also comes through in the show’s singing, dancing, and spontaneous guitar playing. Through the use of exaggerated musical numbers, Littlewood originally intended to make the subject matter more accessible, as explained by the director in the program. She hoped to abolish sentimental views of the war by using laughter as a tool to engage the public. Accordingly, the Players’ production artfully uses the heavy subject matter as over-the-top entertainment while also quietly critiquing war. The actors’ powerful voices ring out as almost sickeningly sweet. Spencer told The Daily that she hopes to show the twisted contrast between what was actually happening on the frontlines, and the propaganda and glorifying songs that civilians were exposed to back home.

Technically, however, the show is much more subtle. The lighting is clean and simple. Similarly, the main costumes mimic the basic style of Pierrot, a ‘sad clown’ archetype of French pantomime theatre known for his foolish naïveté. No character wears khaki, perhaps because soldier attires could evoke the very sympathy and sentimental imagery which the play aims to counter. Rather than creating the familiar, heroic soldier characters, this effective aesthetic choice casts them as absurd and lost individuals put in unnecessary situations. Speaking of the normalization of war, Spencer said that “[war] veterans are treated as heroes, when in reality, they’re all flawed characters, like the rest of us.”

The set, simple but deliberate, consists solely of wooden boxes and a monitor that screens old photographs and devastating statistics of casualties during peak moments of tension in the play. Here, the absurdity of the war appears in its dark reality, an effective and grounding contrast to the exaggerated style of the rest of the show. On a platform at the back of the stage, live musicians provide the soundtrack. The interaction between the musicians and the characters, though limited, contributes to a sense of breaking down the barriers commonly found in theatre.

This absence of the fourth wall is the most striking aspect of the production. From directly asking the audience questions to sitting amidst audience members, the cast creates an intense, refreshing intimacy between themselves and the audience. These interactions also highlight the humanity of the actors, the characters, and those in the audience. The personal dynamics foster a collective hatred toward the unjustifiable price of war, that is, the senseless loss of human lives.

Spencer also spoke about the effect of treating war as satirical, and its relevance today, as this year marks the 100th anniversary of WWI. With reference to this anniversary, Spencer again lamented how the war is “celebrated rather than commemorated.” She went on to say that “this [celebration] is how violence is normalized,” and that our focus should be on the uselessness of the war itself. With downcast eyes, Spencer concluded, “We haven’t learned from our mistakes.”

Spencer’s echoing of Littlewood’s original concerns should not be taken lightly. Today, as in 1963, the absurd glorification of war is an issue that needs a critical spotlight. Thought-provoking on one hand and entertaining on the other, this completely student-run production provides such a spotlight in a way which is bound to amuse and impress.