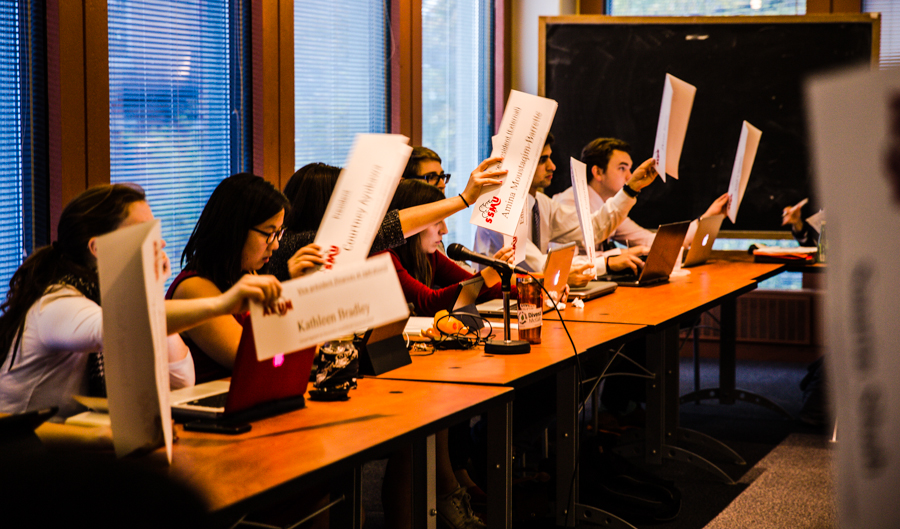 Last Thursday, the Legislative Council of the Students’ Society of McGill University (SSMU) convened for the second time this year. Council passed a motion regarding taking action in support of climate justice, and heard a presentation from AGSEM: McGill’s Teaching Union about its unionization campaign.

The only motion brought to Council this week was a motion regarding climate justice at McGill. The motion asked for SSMU to “reaffirm their support for Divest McGill,” an on-campus student group that calls on McGill to divest from tar sands and fossil fuel companies, and to take actions to support climate justice through various means, like working to create clean energy internships, having climate justice campaigns, and bringing the issue to the Board of Governors.

Vincent-Pierre Fullerton, VP External Relations of the Law Student Association (LSA), said that the LSA took issue with Article 1 of this motion, which stated that “the VP [External] shall, in association with other student unions and student federations across Quebec, create a student coalition demanding that pipeline projects in Quebec be blocked.”

Fullerton stated that “while [the LSA believes] that it is Council’s place to take stances on things of principle, it’s not necessarily Council’s place to oppose specific projects.” He suggested taking the motion to the next SSMU General Assembly to get “more representation from the constituents.” He argued that “the pipeline is really outside of McGill and does not affect us personally as an institution.”

Engineering Representative Anikke Rioux also noted that “a lot of [Engineering students] get their internships [and] get their future jobs from these companies.”

Ultimately, Article 1 was struck from the motion and tabled until the General Assembly for the student body to vote on it.

Arts Senator Kareem Ibrahim expressed his disappointment in the motion’s outcome. “We have been elected by our constituents to make these choices,” he said.

Elgie stated that while graduate TAs are already unionized, these other workers are not, and they are receiving “$12 an hour to do a job that I [a grad student] get $26.83 to do.” He also stated that working conditions and getting paid on time were problems for these teaching support workers.

Elgie approached Council to ask for its support and help with outreach and distributing information about the campaign. He stated that AGSEM needs to get workers to sign memberships and if they reach a majority, they’ll have the legal means to unionize.

So far, the only response the campaign has received from McGill is that “[McGill Employee and Labour Relations Director] Robert Comeau told us not to put our poster on the AGSEM bulletin boards,” said Elgie.

“[McGill] has also suggested that it is improper for us to contact students and members using their McGill emails, or McGill listservs, because those are McGill resources and they claim we are soliciting people at work. Of course, the dual role of student workers as both students and workers means these email accounts are used outside of teaching support work, and in many cases these are students’ primary email accounts,” said Elgie in an email to The Daily. According to Elgie, AGSEM is confident that the objections are invalid.

VP University Affairs Claire Stewart-Kanigan also briefly spoke on the arrest of a McGill football player late Wednesday night, and said that she has been speaking to various media outlets about “student response and how it ties into the progress we’re making on the sexual assault policy.”