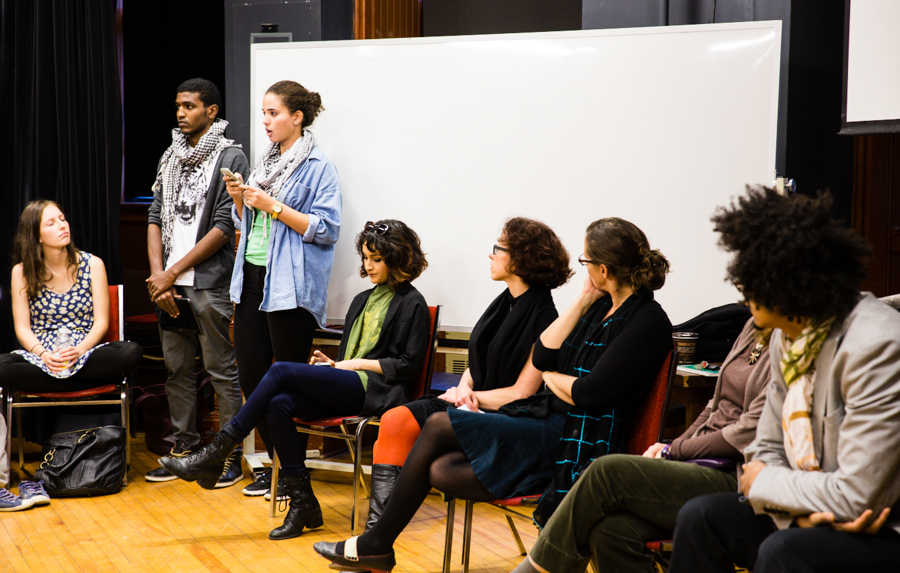 On September 25, the McGill chapter of Solidarity for Palestinian Human Rights (SPHR) hosted an informal panel discussion with three academics from the Institute of Islamic Studies – Associate Professor Michelle Hartman, Assistant Professor Ahmed Fekry Ibrahim, and Associate Professor Rula Abisaab – and the head librarian of the Islamic Studies Library, Anaïs Salamon. The event – the group’s first after being inactive for a few years – was centred on the Boycott, Divestment and Sanctions (BDS) movement and also served to introduce students to SPHR and its activities on campus.

Representatives of the group opened the discussion with a brief explanation of BDS and its objectives. “It’s basically an anti-colonialist call for solidarity with the human rights of Palestinian people in the OPT [occupied Palestinian territories], and with the diaspora as well,” said Nazim Elnur, an SPHR executive. “BDS espouses the tenets of non-violent political action in response to Israeli encroachment and transgressions against the life of Palestinian civilians in the West Bank and the Gaza Strip. Similarly, BDS raises the call for solidarity with those Palestinians abroad [who were] expelled in the numerous periods of violent campaigns in the region and forced to migrate without the right to return.”

While the origins of the tactic can be traced as far back as 1945, when the Arab League called for a general boycott of the Zionist community in Palestine under the British Mandate, the BDS movement itself was initiated by Palestinians in 2005. Since then, the movement has achieved substantial international attention and support.

Elnur acknowledged, however, that BDS also has many detractors. “Some say the BDS movement works to delegitimize Israel and its status as a nation. […] Others say that, although BDS is a non-violent organization, many of its protests have turned violent.”
“These [accusations of violence] are all deflecting the question,” said Abisaab, stressing the importance of contextualizing isolated incidents of violence, rather than using them as a basis to judge BDS as a whole. “We cannot generalize that the movement itself carries the seeds of violence,” she said. “This is a non-violent cause, it is a just cause, and it is the only way to go.”

BDS initiatives fall into three broad categories, according to the movement’s website: boycotts, which target “Israeli and international companies and institutions that profit from the violation of Palestinian rights”; divestment, which involves selling off business interests or investments linked to Israel; and sanctions, which aim to “mobilize government officials and bodies to denounce trade with Israel, and especially with firms located on settlement ground,” according to Elnur.

Elnur made a point of highlighting the relevance of BDS to McGill, noting the existence of “University investment portfolios profiting from corporations directly involved in the Israeli occupation, more commonly [known as] the building of settlements internationally recognized as illegal.”

“I myself am torn over some of the issues,” said Ibrahim, discussing the moral complexity of the academic boycott. “I mean, how do you deal with Palestinians working at Israeli institutions? […] Those kinds of issues are difficult to resolve, but I think institutionally […] there is some collateral damage that will be done.”

Highlights from the SPHR McGill Panel

The discussion was well-attended, exceeding the capacity of the room where it was held. “The mood was just fantastic,” said SPHR executive Anas Shakra. “It exceeded all our expectations.”

Hartman was also pleased that the event had attracted so much interest. “It’s so wonderful to see this many students […] from McGill at a meeting for Palestine solidarity. For me, that’s so exciting.”

Addressing the frustrations toward the often slow progress of BDS and the struggle for Palestinian human rights, Hartman shared grounds for optimism. “There is a momentum, which someone like me has seen over time, of a building of solidarity around the world,” said Hartman, who argued that there was a similarity between BDS and struggles against apartheid in South Africa. “It’s not nothing to say, well, we’re working on this little by little in places around the world.”

Hartman told participants that she is interested in the idea of normalization, which, in this context, is linked to a certain perception of the Israeli-Palestinian conflict. According to Hartman, it implies a certain equity between the two sides, and depicts the struggle as inevitable and age-old. “To me, that isn’t really the right analysis for this situation of colonialism.”

Salamon elaborated on the issue, sharing her experience of life in the OPT. “I lived in Palestine for two years in the early 2000s and this was really the moment when I realized that something needed to be done,” explained Salamon.

“I actually lived the daily effects of the occupation,” Salamon continued. “It made me realize how genuinely pro-Israeli we were in France. When you don’t know much about the conflict, you tend to oppose two equal sides without realizing that by doing that, you actually justify the Israeli occupation.”

One recurring theme was the actions McGill students should take in order to express their solidarity with Palestine and further the cause of BDS. According to Shakra and fellow SPHR executive Sara Ismail, one simple step would be to participate in the consumer boycott by avoiding Israeli products.

Another important demonstration of solidarity, said Hartman, is to seek information about the boycott. She stressed the value of challenging people’s misconceptions about BDS and spreading the word about the movement’s non-violent stance in day-to-day life. This, said SPHR executive Arezu Riahi, is one of the key objectives of SPHR at McGill. “Part of what we are trying to do is dispel this idea that resistance has to be necessarily violent. Awareness is a form of resistance.”