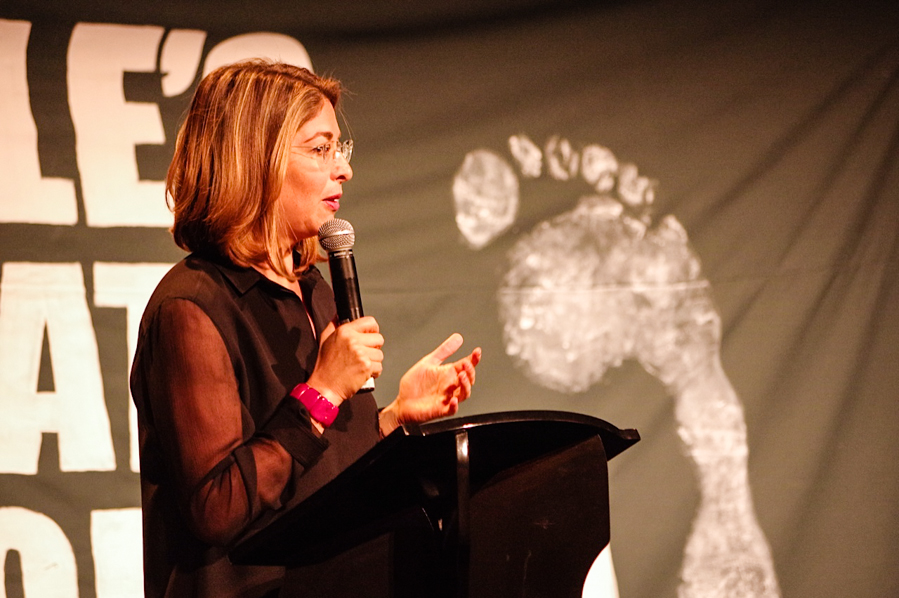 Klein, a Canadian author and political commentator, was in Montreal last Tuesday to give a talk marking the release of her book This Changes Everything.

The event – organized by the Students Society of McGill University (SSMU), the Concordia Student Union, Divest McGill, Divest Concordia, Ricochet Media, and Climate Justice Montreal – drew a full house audience at the Imperial Theatre, near Place-des-Arts. The talk was centred around the relationship between activism, capitalism, and climate change, all themes addressed in Klein’s new book.

According to Klein, This Changes Everything focuses on the idea of radical change, a notion she described as “getting at the root of the problem.”

“It’s going to take intervention, it’s going to have to be a much more designed economy,” she continued.

“Hopefully it brings students out, it gets the word out […] and people are kind of swayed toward working on climate justice, toward working toward divestment, […] because of these events that are happening,” she said.

Tuesday night’s event featured a photo montage of sites along Enbridge’s proposed Energy East pipeline, shot by Robert van Waarden (a Montreal-based photographer who focuses on climate change). Gabriel Nadeau-Dubois, an activist who played a large role in the 2012 Quebec student strike, also spoke to the connection between austerity politics and climate change.

Nadeau-Dubois focused on the penetration of neoliberal economics in the Couillard government’s current policy. He accused the federal and provincial governments of closing their eyes to the risks of the proposed Line 9 pipeline, saying that it is wrong of them to require economic grounds in justifying environmental solutions.

A need for activism

Central to the theme of Tuesday’s presentation was the notion of using activism as a tool to fight climate change; Klein spoke more about this idea with The Daily. “I think the change that we need is so deep and so rapid that the only precedents I can point to in history is times when activism stopped being a small subculture.”

“Without [activism] I don’t see a way to deal with the crisis,” she later remarked. “We’re up against the most powerful and rich forces in the history of money, they’re not going to give this up without a fight.”

Moustaqim-Barrette told The Daily that Klein has encouraged student activism in the past. “Naomi Klein is a big supporter of divestment and has been one of the people who is like the face of divestment. She’s been a great supporter of the the movement.”

However, Klein noted that the purpose of this activism would be more to raise awareness, as she said it is unlikely that actions like these would directly impact large corporations.

“This is not going to bankrupt Exxon,” she remarked in response to an audience question.

“The goal is for these companies to be made into pariahs like tobacco companies,” she added.

Klein later noted that she thought the real potential of fossil fuel divestment was the possibility of reinvesting divested money into socially conscious initiatives.

When asked about the potential for divestment as a movement to keep growing, Moustaqim-Barrette seemed optimistic.

“The momentum we’ve seen in the last few years has been insane and I have met so many people who are just so passionate about this and I really feel like those people are not going to let this die,” she said. “We’re going to keep pushing and we’re going to succeed eventually.”

Klein’s tour continues across North America and Europe, including an appearance on the late-night Colbert Report on September 23.