Military funding and purpose not disclosed to participants 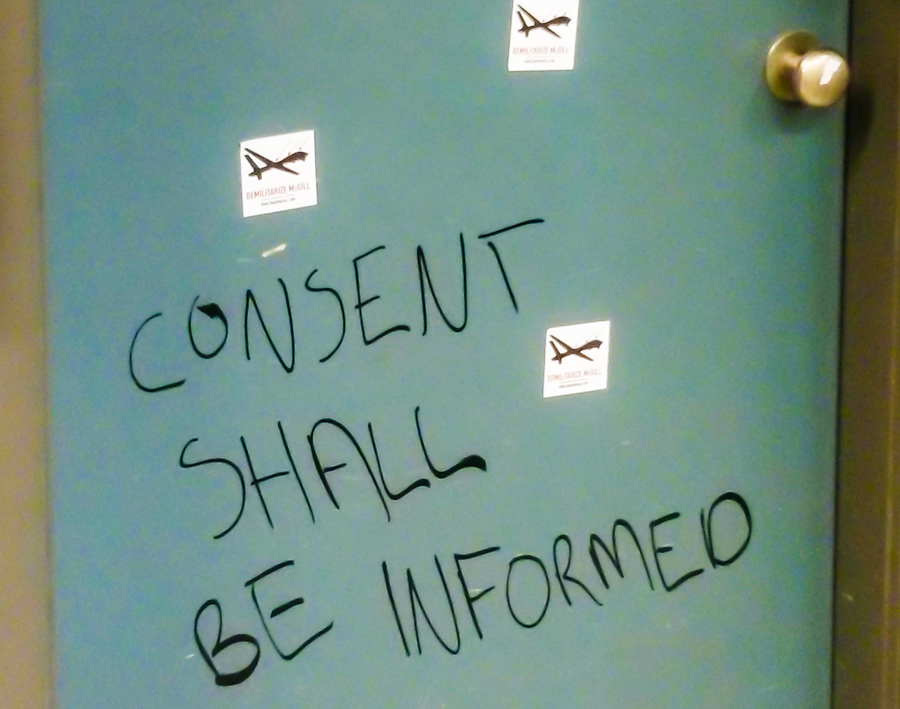 Researchers from the psychology departments at McGill and Carleton University allegedly breached research ethics in a study conducted in 2012 and funded by the Canadian military, according to findings released on August 28 by campus group Demilitarize McGill. The researchers, which included McGill psychology professor Donald M. Taylor and then-PhD student Michael King, failed to inform the research subjects of the funder and intended counterinsurgency applications of the research.

According to a report submitted by the researchers to Defence Research and Development Canada (DRDC) – the research wing of the Canadian military and the funder of the study – eighty Somali Canadians were given a survey “designed to shed light on the attraction of young people to Armed Non-state Actors,” and their responses were analyzed “in terms of their relationship with support for engaging in terrorism.”

The participants of the study, however, were informed of the purpose of the research in very different terms. After taking a questionnaire entitled “Your voice: Somalia according to Somalis,” they were notified that the research “aims to understand which groups you identify with, what your feelings are about your group’s status, and what you think can be done for the future of your group.”

Demilitarize McGill member Isaac Stethem described the study to The Daily in an interview. “Essentially, what the military seems to be interested in finding out is how young Somali Canadians feel about groups such as al-Shabaab, which the Canadian state views as a terrorist organization; there were also questions about Muslim identity, how strong their Canadian versus Muslim identity was,” said Stethem.

“Nowhere in any of the documentation […] they gave to participants did they say either that the purpose of the study was to provide information to the military on sympathy for what they termed ‘non-state actors,’ nor did they actually disclose that the military was funding it,” added Stethem.

Stethem argued that the failure to disclose the funder and the full purpose of the research, even in the debriefing documentation given to participants after they completed the survey, is a violation of the Tri-Council Policy Statement, which governs research ethics in Canada.

“When you do a study on human subjects, you have to get their informed consent [… which] is supposed to include what is the purpose of the study, as well as who is funding it. That wasn’t done here.”

Michael Wohl, professor of psychology at Carleton and lead investigator in the study, argued that the purpose of the research was presented accurately to the participants.

“The purpose of the research on the Somalis, as outlined in the consent form, was to understand the issues facing Somalis in Canada,” Wohl told The Daily. “The issue of support for al-Shabaab is but one small piece of a larger study trying to understand how this marginalized community is adjusting to life in Canada.”

“They [DRDC] are interested in a broad spectrum of issues, one of them being how different groups adjust to being in Canada,” added Wohl.
When asked whether the participants were informed that the report on the study would be transmitted to the DRDC, Wohl said, “No. It’s the same as if […] we published in an academic journal, we don’t then go back and direct [the participants] to the journal.”

“We strongly suspect that there was a fear among the researchers that if they told people what the study really was, then people might have been less inclined to participate.”

Stethem, however, held that Wohl’s comparison was faulty. “Of course, one can never predict every possible application of a study, but in this case it very clearly did have planned uses and applications that were known beforehand,” said Stethem.

“From the outset, [the researchers] were told to design a study that will tell us if and why people are attracted to ‘armed non-state actors,’” he added. “That was the point of the contract they were paid for, and clearly something that could have been disclosed to participants and wasn’t.”

Taylor, who was a co-investigator on the study, did not return The Daily’s request for comment.

Shelley Brown, chair of Carleton’s Psychology Ethics Board, which approved the study, conceded that the requirement to disclose the identity of the funder of the research is present in the Tri-Council Policy Statement. However, she noted that the requirement can be waived at the discretion of the ethics board if the researcher provides a rationale.

In an email to The Daily, Research Ethics Officer Lynda McNeil confirmed that McGill operates in the same manner. “It is then up to the REB [Research Ethics Board] to consider, for each specific project, whether all elements listed, such as the identity of the funder, are necessary to the consent process of a specific project,” wrote McNeil.

“The data that was collected was stripped of all personal identifiers,” Brown told The Daily. “There was no risk to participants that their responses would […] be shared with anybody outside of the research team, namely DRDC. Because the risks had been mitigated in terms of confidentiality, […] the requirement to have the source of the funder in the informed consent [form] was waived.”

In response, Stethem argued that the fact that confidentiality was protected was not a sufficient rationale to waive the requirement to disclose the funder.

“The researcher has to present an argument and convince the board there’s a good reason [to waive the requirement], and they [the Board] didn’t seem to be able to provide any reason,” Stethem said. “We strongly suspect that there was a fear among the researchers that if they told people what the study really was, then people might have been less inclined to participate.”

As a group that fights military research at the university, Demilitarize McGill has focused its work in the past on research in science and engineering with military applications in foreign wars, such as the development of drones and explosives. However, the study on Somali Canadians shows that the scope of military research at McGill extends beyond these technologies, Demilitarize McGill member Kevin Paul explained in an email to The Daily.

“Dr. Taylor’s work shows that military research at McGill not only supports the development of missiles and drones used to kill people in distant wars and occupations, but also augments the capacities of military and intelligence to surveil and control domestic populations, particularly those non-white groups that the Canadian state deems inherently threatening,” said Paul.

Echoing Paul’s sentiments, Stethem spoke to the broader role of university research in perpetuating systems of oppression and social control.

“There’s also an enormous amount […] of social science research being done for [the] military,” said Stethem. “It’s a sort of trend where social science research is being used in order to improve the effectiveness of […] military strategies – in terms of imperialist wars you see going on in a variety of places, and also in terms of internal policing, repression, and so on.”

“[What’s notable is] certainly not only that these kinds of instances of oppression go on, but also the extent to which universities contribute to them, and give them […] prestige and funding.”