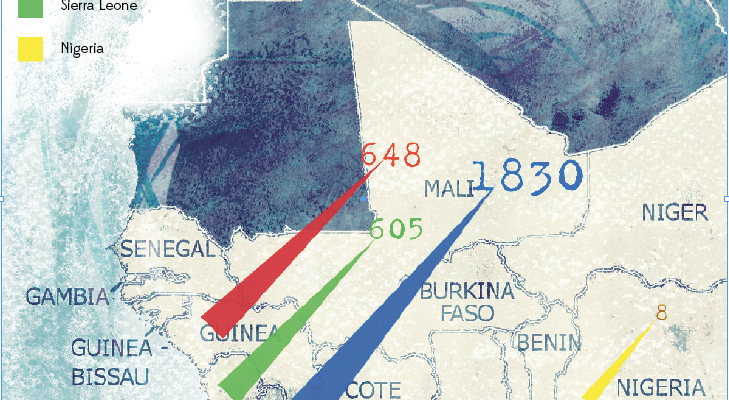 Data for infographics from WHO and WebMD

On September 25, Friends of Médecins Sans Frontières at McGill hosted an event titled “Ebola 2014: Curbing the Epidemic” to raise awareness and address misconceptions about the infectious disease. The event had a turnout of more than 150 students. The two speakers at the event were Jean-Baptiste Lacombe, who worked as a MSF logistician in Guéckédou, Guinea on a one-month emergency mission, as well as Cedric Yansouni, an associate professor at the McGill Faculty of Medicine and a researcher for the J.D. MacLean Centre for Tropical Diseases.

In recent months, Ebola has been portrayed as a serious epidemic in West Africa. According to the presentation, the epidemic was declared last March, and the first cases were reported in Guinea. After this, the epidemic spread rapidly throughout Guinea and to the surrounding countries. Since then, the outbreak has affected Sierra Leone, Nigeria, and Liberia, and has killed more that 3,000 people, causing panic in West Africa and raising international concerns.

Lacombe addressed the Ebola scare created by media outlets, which have been exaggerating facts and spreading paranoia ever since the outbreak started. At the time, the healthcare system of the region was extremely weak, which is why doctors from Médecins Sans Frontières (MSF) had already been established and working in West Africa for some time. Lack of knowledge about the virus as well as misconceptions about its contagiousness led to widespread fear – the local media in Guinea even stated that contracting Ebola would result in certain death. “Fear and incomprehension led to patients not going to treatment centres, hence spreading the virus further, and causing cases of contact [to be] hidden, as well as the ostracization of the survivors,” said Lacombe.

While there is no cure for Ebola, according to the World Health Organization (WHO) the mortality rate of Ebola can vary between 25 and 90 per cent. Lacombe explained supportive treatments, such as maintaining oxygen status and blood pressure, making sure the patient is hydrated, and keeping their electrolytes balanced, can greatly increase the survival rate of the disease. This shows the essential need for treatment centres in affected regions.

The recent outbreak came as a shock to many as it occurred on a larger scale than previous ones. Addressing this shock, Lacombe stated that in addition to “fear of the disease, there are also cultural implications and operational implications.” Time reported that cultural practices that involve physical contact such as burial rituals largely account for the increase in cases of people contracting Ebola, as the virus is transmitted through contact with bodily fluids. In addition, there is a limited number of deployable medical teams. On this note, Lacombe also mentioned how the high turnover rate of international medical and logistical staff created a lack of institutional memory over time in dealing with the outbreak.

“We need to find new ways to communicate about the disease […] and to improve our understanding about it.” Realizing this, MSF has since changed its approach to the disease, tackling it as a social rather than a medical problem. The organization been meeting with local community leaders to provide them with information on Ebola, as well as increasing transparency by giving patients cell phones so they can communicate with concerned relatives. They have also filmed raw footage to show what happens in treatment centres, all in an effort to counter misinformation, false perceptions, and panic.

Yansouni spoke about the harm in taking too many medical precautions, and warned how the hysteria in trying to contain the spreading of Ebola is raising concerns about the preparedness and ability of the healthcare system here in Montreal. “A lot of the time more protection gives you either a false sense of security, or it displaces your attention to where you really need to be careful,” he said. For example, in the case of Ebola, taking the extra precaution of assuming it is airborne could lead to accidental transmission by bodily fluids, which is actually how the virus is transmitted.

The crux of the issue in Montreal lies in the worry that people from affected regions are at risk of having the disease and potentially spreading it. This belief has a significant effect on the way Montreal hospitals treat people from West Africa. In an overwhelming number of cases, the patients may not have Ebola, but may have something else like malaria or leukemia. But because of the recent West Africa outbreak of Ebola, anyone who has visited the region is automatically suspected of Ebola. Yansouni warns that a false assumption could lead doctors to inaccurately diagnose patients and recommends everyone take reasonable precautions.

Although it remains to be seen whether or not this recent Ebola outbreak will transmit to Canada, it has served as wake-up call to our healthcare system and sparked questions on how it deals with infectious diseases.

It's easy! You can email the editors at scitech@mcgilldaily.com!