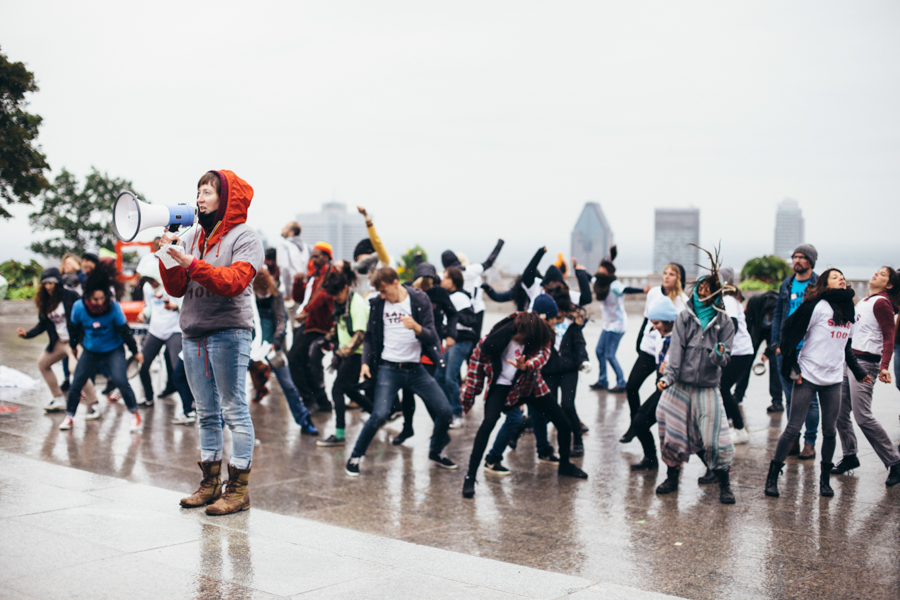 On a rainy Saturday afternoon, political activists, dance enthusiasts, and Mont Royal hikers came together for “Mouvement sans/100 manifestes,” a dance performance in front of the Chalet du Mont-Royal. The performance sought to “democratize dance and demystify the relationship between artist and spectator,” through a peculiar mix of spoken word, acrobatics, and contemporary dance. In the early afternoon, 70 performers on the mountain chanted “I love art, you love art, we need art,” while dancing and performing acrobatics, such as cartwheels and handstands.

“Mouvements sans/100 manifestes” was but one performance in 12th edition of the Festival Quartiers Danse. The nine-day festival featured venue shows, exhibits, films, and workshops, all seeking to promote the “democratization” of culture and the Montreal dance community. For this festival, the “democratization of dance” means “promoting artistic diversity,” “encouraging artistic development,” and “bringing dance closer to its audience.” This mandate was put into practice in the public contemporary dance performances that occurred throughout eight Montreal neighbourhoods during the festival, including the Milton-Parc community.

“Mouvements sans/100 manifestes” certainly kept with this democratic goal. Dancers expressed themselves – through both movement and spoken word – as they saw fit. They wrote their own manifestos, performed acrobatics, and choreographed their own movements. Helen Simard, the organizer of the show, told The Daily that “each performer proposed what they wanted to share. I did very little editing or censoring, because I really wanted it to express what they had to say, instead of imposing my own view over it.”

Likewise, the dance was performed at Chalet du Mont-Royal – rather than a formal theatre – to take back a public space and show that art has its place there as well. Dance was not depicted as an exotic, transcendental art form, but rather as a natural, straightforward form of expression available to each member of the crowd. The crowd, rather than the performers, stood at an elevated level – which raised questions of power-dynamics, and showed the importance of the crowd in this performance. Proclaiming “you see me, I see you. This moment is nothing, and this moment is everything. We are both,” the performers stepped up close to look each member of the crowd in the eyes, directly including them in the event.

While the performance achieved its political aims, it did so in a rather isolating way. The spoken word – which accompanied the dance throughout the show – was imbued with pretension. The performers referred to art as an essential part of our everyday lives which makes “our souls spin and stomachs rumble,” claiming that “art doesn’t matter and that’s what’s powerful.” The speeches lacked substance, featuring phrases which only served to convey sophistication, while the dance itself was extremely simple, forgoing elegance and synchronicity. There was no discernible connection between the minimalist dance and the overindulgent language – instead, the pretentious spoken word rendered the show ironically inaccessible.

Simard, however, welcomes this perspective, saying that “art is democratized by making a space that says it’s okay if you don’t get it and it’s okay if you have something to say that I don’t agree with.” The point of the show was to give a voice to the people. Each member of the dance crew – ranging from undergraduates, to parents, to professional performers – was given a chance to voice their thoughts on the purpose of art. Likewise, the audience was welcomed to interpret the piece as they saw fit. Simard contends that when art is atypical it invites discussion and forces us to engage with new and complex ideas: “there’s too much pressure on having to understand what things mean,” she says. “When you don’t understand things, life is much more interesting because you have to work to understand it. I think whether somebody likes it or not it is a moot point – the question is whether you engaged with it.”

The physical aspects of “Movements sans/100 manifestes” used simplicity and proximity to make dance performance an inclusive experience – unlike the odd hierarchy of sitting still while watching complex movements onstage that is present in most formal shows. While the discourse may have been grandiose, and the dance lacking in cohesiveness, the passion of each performer was palpable as they danced, chanted, and spoke in the pouring rain, attempting to reach out to and stir the crowd. As Simard puts it, “Art is meant to allow the possibility of other ways of thinking, being, or doing. Art isn’t meant to just be about beauty.”