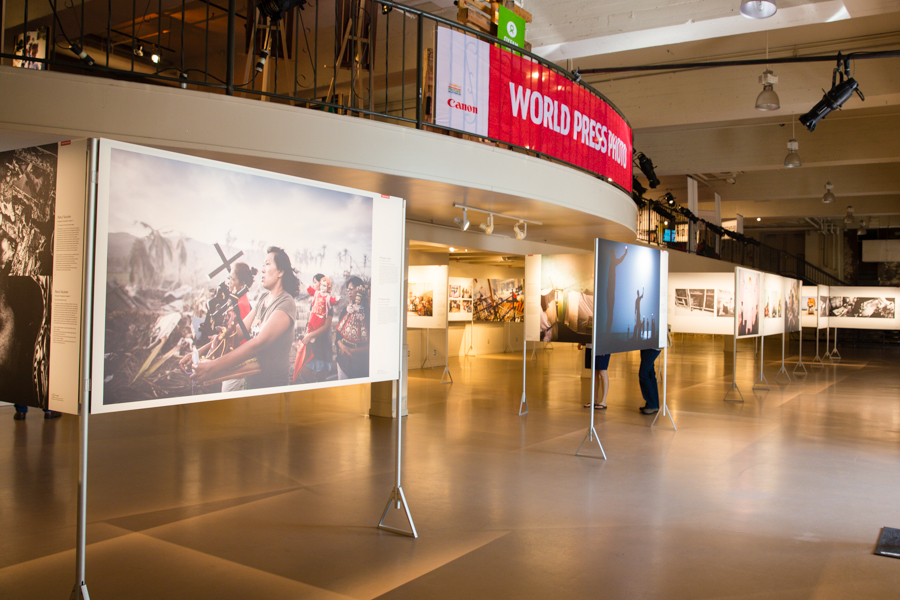 Another muggy weekend cues the arrival of classes and the end of summer, setting off the gradual shift of Montreal’s cultural events from the outside to the indoors. The 2014 World Press Photo exhibit is no better forerunner of this transition. Entering its eighth year at the Marché Bonsecours, the exhibit represents a panel selection of the best photojournalism from 2013. Drawing from a pool of over 98,000 images from 130 countries, submitted by over 5,800 photographers, images are selected for a variety of categories and all display different glimpses of humanity – from frozen stills illustrating the agonies of wars, to surreal snapshots of the environment, and to the eloquence of the human form. The exhibit also includes three exposés by Oxfam-Québec, ICI Radio-Canada, and Nightlife Magazine.

The prize winning photo, by John Stanmeyer for National Geographic, ushers in newcomers to the exhibit with its depiction of migrants on the coast of Djibouti, looking for a cellular signal. As figures seemingly congregate toward the sea under the pale moonlight, the image serves as a perfect example of how the World Press Photo exhibit challenges perceptions – in this case countering mainstream media’s often condescending or derogatory reporting on migrants. As juror Susan Linfield noted, “So many pictures of migrants show them as bedraggled and pathetic…but this photo is not so much romantic, as dignified.”

The selection of the image for its subtle representation of seeking within the unknown markedly avoids the more common tropes associated with photojournalism: rather than choose an image of war or suffering, the level of abstractness in the image provides it with an engaging level of depth. The photo goes beyond figures simply standing on a beach, and evokes ideas of movement and transience.

These same themes can also be traced throughout the various photo categories presented by the exhibit. In the Nature segment, a series of still lifes on Norwegian fishing hamlets depicts their slow and inevitable decline, while also showing an Egyptian migrant drying cod where locals have ceased doing it themselves. This migratory theme interplays with that of transience, as images of demolished cities in the Philippines, and of a man and woman embracing in the rubble of a Bangladeshi garment factory, call for a reflection on the fleetingness of life and the momentary nature of the photos themselves.

In selecting the finalists, the head of the jury panel, Gary Knight, stated that the choice of images by the jury would be based on their photographic quality and that the jury would refrain from any editorializing, beyond what the photographers themselves were striving to achieve. This internalized approach is not uncommon in judging competitions; however, in the case of World Press Photo, some concern has been raised as to the existing business relationship between Stanmeyer and Knight, co-founders of VII Photo Agency. David Campbell, the current secretary of World Press Photo, addressed the controversy by detailing the extensive steps taken in the voting procedures to ensure transparency, going so far to say, “There is simply no basis in evidence for questioning the conduct and integrity of Gary Knight, the general jury chair, who at all times created an open environment for free debate on all entries.” Given the multiple levels of voting, as well as the anonymity of jurors’ selection and a point-based system, it’s difficult to suggest anything out of the ordinary (Knight was unable to recuse himself due to World Press Photo rules).

More disconcerting were the statistics released in the same blog post with reference to photographers and the contributions: only 14 per cent of entries came from female photographers, and a little under half of the images originated in Western countries, with two thirds of the panel composed of either Europeans or Americans.

The accompanying exhibits also deserve mention, if only to emphasize the quality of their parent show. The ICI Radio-Canada section mostly misses the opportunity of playing off the photojournalism aspect of the show. With a variety of televisions playing reruns of Radio-Canada’s reports from the events pictured in the gallery, the lack of earphones or subtitles indicating what was being said gives the impression that journalists are simply talking heads. The most unfortunate of the three additions is that of Nightlife Magazine. Under the heading of the Montreal “Cultural Scene,” images of electronic concerts and revellers are jarring, falling flat after the complexity of the main show. Oxfam-Québec, on the other hand, provides for an uplifting collaboration curated by William Daniels, a former World Press Photo winner, featuring images of ‘micro-enterprises’ in Benin coordinated by Oxfam. However, despite Daniels’ addition, the exposés fail to grasp the transitory theme of the show and the depth of photography it illustrates.

The 2014 World Press Photo gallery, while perhaps lacking in a diversity of perspectives, is a collection of challenging and thought-provoking images that will resonate with viewers on each stop of the gallery’s international tour because its themes are, indeed, universal.