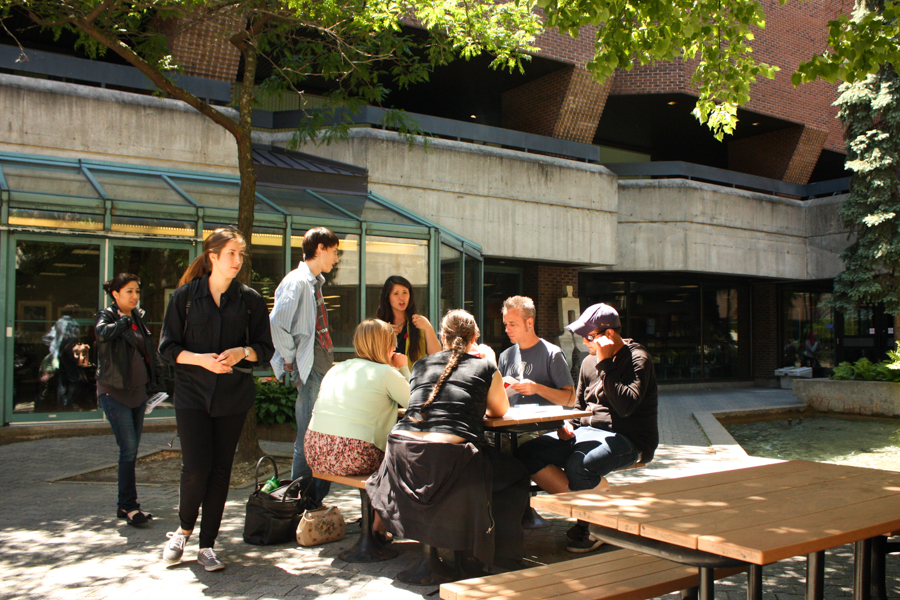 Over 200 students from across North America convened at the Université du Québec à Montréal (UQAM) last weekend to share lessons and experiences on progressive student organizing in the United States, Mexico, Canada, and Quebec.

Organized by CEGEP and university students who actively participated in the 2012 Quebec student strike – most as members of the Association pour une solidarité syndicale étudiante (ASSÉ) – the four-day Montreal Student Movement Convention (MSMC) provided a space for students to discuss the history and social context of student organizing, to exchange strategies for effective mobilization, and to examine the challenges of building an intersectional student movement.

“After the student strike in 2012 here, people were asking for ASSÉ to send people to different conferences around the [U.S.], Canada, and everywhere, so […] that’s where the idea of the MSMC came from,” Maya Almeida-Dutilly, one of the convention organizers, told The Daily. “People want to come here and learn, but we also want to learn some things that they are doing on their campuses. So it’s really [about] sharing experiences, and meeting people, and creating a network.”

Several workshops, led by student and community organizers from ASSÉ and from various locations in the U.S., focused on building local student unions and organizing them into larger federated structures using direct democracy. The convention ended with a general assembly, where a symbolic collective statement in support of free education was passed.

“It was huge for us – watching from afar, seeing what the students here were doing […] and it really inspired a lot of organizing all across the United States, all across the world,” said Christina Kane, a student organizer from Portland, Oregon, in an interview with The Daily. “What the strike did was [that] it started a conversation about student unionism.”

Recognizing the interconnectedness of the struggles against oppressive systems, the organizers of the convention dedicated a significant amount of time to workshops on feminist and anti-racist practices and organizing within the student movement.

“While we [conduct our] campaigns [… racism and sexism] are happening even inside our own organizations,” said Almeida-Dutilly. “We’re against racism and sexism, so we have to talk about it.”

In a workshop on feminism and sexism in the student movement, ASSÉ Women’s Committee members Myriam Leduc and Jeanne Reynolds discussed ASSÉ’s feminist organizational practices, as well as the challenges women continue to face in the student federation.

Reynolds noted that ASSÉ has adopted, not without initial resistance from many of its members, practices such as alternating speaking turns between women and men during assemblies, and delegating a person, titled the ‘gardien-ne du senti,’ to call out speech and behaviour that reinforces existing power structures.

“While we [conduct our] campaigns [… racism and sexism] are happening even inside our own organizations. […] We’re against racism and sexism, so we have to talk about it.”
– Maya Almeida-Dutilly, organizer

Leduc and Reynolds also spoke to the importance of women’s committees, both in local student unions and at the level of the national federation.

“[The] Women’s Committee aims to be a non-co-ed space […] for women, which is necessary to go further with our projects without men’s opposition,” Reynolds said. “It also enables us to break with the sexual division of labour and to gain confidence to continue our involvement in our national committees.”

The “sexual division of labour,” Leduc explained, manifests itself in the fact that highly publicized, symbolically important positions tend to be occupied by men, while women find themselves doing little-recognized organizational work or get involved more at the local level.

Leduc noted that dealing with sexual assault in a way that would be respectful of survivors and would not individualize the problem, and “developing a feminist, anti-racist perspective and putting it on the front line,” are other challenges that the federation continues to face.

In a workshop entitled “Anti-Racist Organizing in the Student Milieu,” activists Rushdia Mehreen and Beatriz Munoz tackled the issues of systemic and interpersonal racism that existed within ASSÉ during the 2012 strike. Mehreen and Munoz were members of ASSÉ’s Social Struggles Committee, but resigned in February 2013 with fellow organizer Myriam Tardif.

At the talk, Mehreen and Munoz noted – as they had done in their resignation letter – that their status as women of colour in a predominately white male-dominated organization was the reason why they had trouble making their voices heard, despite the fact that ASSÉ has a much more democratic structure than other student groups.

“Sometimes, when we talked […] because, you know, we are not from here, we felt as if we weren’t heard, maybe because they didn’t [make] the effort to listen to us,” said Munoz, going on to explain that there were multiple occasions where it was only after her ideas were repeated by one of her fellow committee members, a white male, that they received interest and recognition from other organizers.

Mehreen and Munoz also said that sometimes, when they brought up ideas for bringing the student movement in a new direction – one that they felt would better combat capitalist society and defeat systems of oppression – other organizers would greet their ideas with explanations as to why the two women were wrong and did not understand the point of the movement. According to Mehreen and Munoz, their colleagues’ dismissive tendencies were extremely difficult to bear and made them feel as if they were not respected within the organization.

In a discussion after the presentation, many audience members expressed frustration with people of colour being overlooked and tokenized in organizations that are predominantly white.

“I feel like a lot of the things [the presenters] are talking about are things that I have experienced and [that] are probably one of the biggest frustrations I’ve had, being a student activist,” said one audience member. “It was so frustrating. There were so many instances where I would say things, or I would be facilitating meetings, and consistently be questioned. […] I would have colleagues who were white, able […] cis men who would be able to say the exact same thing that I said, or summarize what I said, and people would be like, ‘Yeah, that totally makes sense, we should do that!’”

She also noted that many tactics used by student organizations, such as taking to the streets without a permit, while effective and exciting, can make activism less accessible to people of colour, who are more likely to be targeted by the police during illegal action than white people.

“The way that this is tackled in Ontario is – they will often go to clubs of ethnic minority identities […] and they’ll say ‘Oh, you’re good for this position, you should run,’” said another audience member, a student at the University of Toronto. “Once they’re inside, they are told to basically be in this box, like, ‘You are our racialized member. You have to use these buzzwords. You have to say these things.’ […] And I think it makes people very uncomfortable.”

While many attendees spoke positively of the convention, some students criticized the workshops for giving too much time to discussions of revolutionary theory, and not enough to considerations on the improvement of practices and structures within student groups and organizations.

“A lot of the content [has] been very generalized,” said Jessica Denyer of the University of Toronto. “I would say that this past workshop [on anti-racism in the student movement] was one of the actual ones that broke down the wall into actually talking about organizing in a real way. But the majority did not.”

Bri Bolin, a professor at Columbia College in Chicago, on the other hand, was hopeful that the convention would be a step toward building solidarity among student organizers throughout the world.

“The best thing about it was just having the opportunity for everyone to get together and talk to each other and share stories of our struggles, share our tactics, critiques of our movements and how we can improve them and increase solidarity among everyone,” Bolin told The Daily. “Beginning with North America, I suppose, and then hopefully branching outwards.”