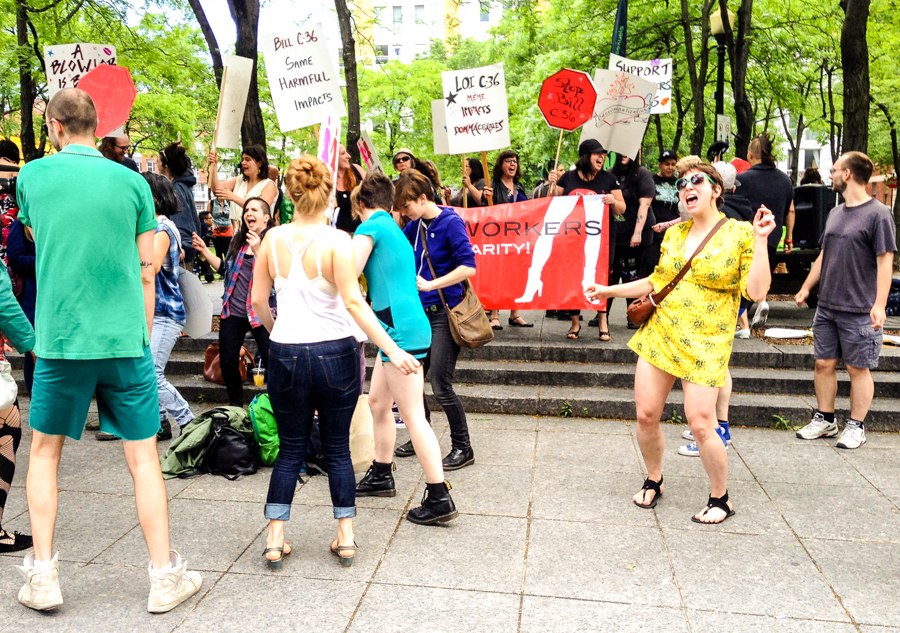 The demonstrators claim that the proposed bill, which aims to criminalize sex work more than any other legislation in Canadian history, will have an extremely negative effect on the overall safety, health, and working conditions of sex workers.

In the ruling of Canada v. Bedford last December, the Supreme Court of Canada unanimously decided that three articles in Canada’s criminal code endangered sex workers. These laws forbade brothels, communication for the purposes of soliciting sex, and profiting off the sex work of others. The Court, however, left Parliament the discretion to impose, as Chief Justice Beverley McLachlin wrote in the final paragraphs of the decision, “limits on where and how prostitution may be conducted.”

A direct response to the Court’s ruling came earlier this month from Peter Mackay, Minister of Justice and Attorney General of Canada, when he introduced Bill C-36, which outlined the Conservative government’s proposal for new limits on sex work. This draft legislation criminalizes, for the first time in Canada’s history, the buying of sex.

While the selling of sex would remain legal, Bill C-36 makes it a criminal offence for sex workers to communicate for the purposes of gaining work or providing their services in a place where a minor might be present. Bill C-36 also brings back the provisions struck down by the Supreme Court, forbidding brothels and people other than sex workers “receiving a material benefit that derives” from prostitution. In addition, the proposed legislation places a ban on all advertising of sexual services, including on the internet or in newspapers.

Anita, an outreach worker for Chez Stella, a Montreal-based sex worker rights organization, told The Daily that if Bill C-36 is passed, the provision that prohibits sex workers from working in places where minors are expected to be present will drive them “into darker corners of the city.”

“That’s basically any public space. So that means that sex workers will be in abandoned parking lots, in industrial complexes, near train tracks.”

Anita noted that if the advertisement of sexual services online is forbidden, “they will have to leave the interior to look for their clients. So it’s actually going to bring sex workers onto the street and make them more vulnerable in searching for their work.”

Many protesters also voiced the criminalization of clients as one of their biggest concerns with the draft legislation.

“If you are afraid that your client is going to get arrested or you are going to get arrested, you jump in the car and that is the most dangerous situation you could be in. […] You can’t take the time to suss out if a client is drunk. […] [You have to] make sure that you agree on wanting the same thing, and that they agree to safer sex,” said Anna-Louise Crago, a former sex worker and a current Trudeau Foundation scholar researching violence against sex workers.

Viviane Namaste, a professor at Concordia University’s Simone de Beauvoir Institute, said that much of the academic literature and research on the topic echoed Crago’s concerns.

“The proposed bill involves criminalizing clients, and there is actually quite a bit of research available that shows that that model, in fact, creates a context in which women who do work in [the] sex industry are […] more invisible and it is more difficult for outreach workers to get in contact with them,” she told The Daily.

In an email to The Daily, Daniel Weinstock, professor in the Faculty of Law at McGill, compared the new bill to the clauses recently struck down by the Supreme Court.

“Overall, the goal of [Bill] C-36 is different from the laws presently in the books, in that whereas the latter aims to keep sex workers out of sight and earshot, the former has an eliminationist intent,” he said. “Provision by provision, the new law is more draconian than the old in terms of communication since it targets online and print publications that advertise sexual services.”

The president of the Board of Directors at Chez Stella, who goes by the acronym J.D., criticized the Conservative government’s choice in implementing Bill C-36. “Peter MacKay is not doing his job. His job is to ensure the protection of Canadians and their rights and […] to make decisions based on evidence. And this decision is clearly not based on the evidence, […] the recommendation of the Supreme Court of Canada, [n]or their decision, and this law really goes in the face of all of that,” J.D. told The Daily.

Although confident that if passed, the laws put in place by Bill C-36 would be brought before the Supreme Court and struck down, Crago predicts a devastating outcome at the cost of this law.

“It will take sex workers – often who are among the most marginalized [in society] – [ten years to] gather […] the [necessary] resources. And in that time women will be harmed, women will be abused, and women will be killed.”