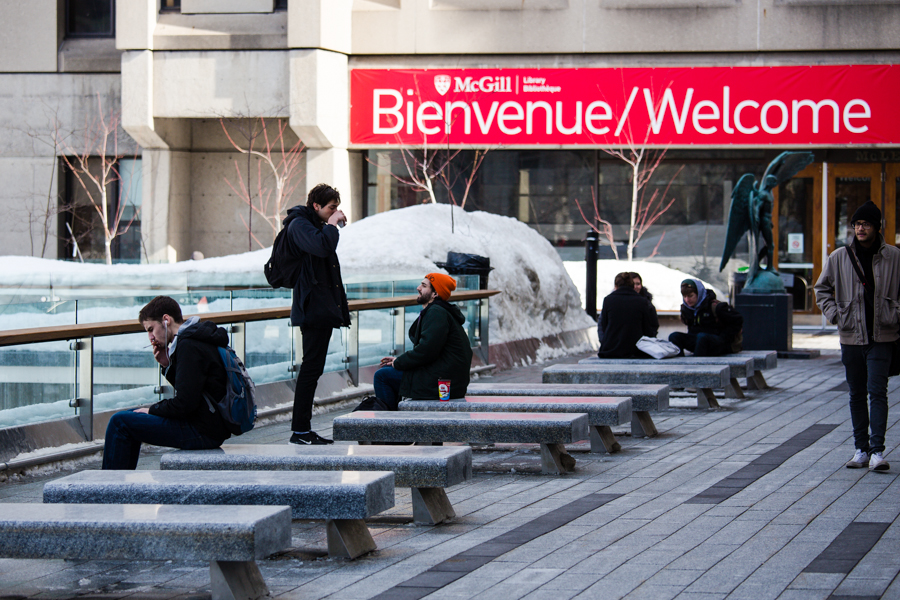 During its February session, the Post-Graduate Students’ Society (PGSS) Council approved a motion to endorse the McGill Library’s plan to designate the McLennan-Redpath terrace as a smoke-free environment. The plan, which has also been endorsed by the University Health and Safety Committee as well as the Senate Committee on Physical Development, will be reviewed in one year to determine whether or not the designation should be continued.

The motion was brought to the table by PGSS Academic Affairs Officer Adam Bouchard. “I motivated the motion by describing how the redesigned space funnels all users through a single entrance that was being heavily used by smokers,” Bouchard told The Daily in an email. “In addition, the cigarette waste generated was killing all the plants, as the butts were not being put into the ash trays.”

Bouchard has been involved in discussions with the Library’s administrative staff, who have been trying to devise a strategy to decrease the amount of smoking on the terrace since it opened for use in January. “Student input helped define the size and scope [of the smoke-free area], in addition to the timeline,” wrote Bouchard. “We were quite involved.”

The Library began its initiative after receiving dozens of complaints about smoking on the terrace. “Because we now have one entrance and exit for the main library […] almost anybody who has to come in from the door has to walk through where a lot of people are smoking,” Trenholme Dean of Libraries Colleen Cook told The Daily. “We got an enormous number of complaints from students about smoking and about having to walk through [crowds of] people who are smoking, as well as staff and other users.”

According to Cook, complaints have also been made about the large number of cigarette butts that litter the library’s entrance.

According to Diane Koen, Senior Director, Planning and Resources for the McGill University Library, the Library has been discussing the issue with McGill Health and Safety, the Dean of Students, the Head of Facilities, and security, as well as student organizations such as the Students’ Society of McGill University (SSMU), Sustainability McGill, and PGSS.

The Library hopes to officially launch the terrace as smoke-free on May 1, according to Merika Ramundo, the Library’s Communications Officer. Students and staff smoking on the terrace will be unaffected until the end of the Winter term.

When told about the initiative, smokers outside McLennan seemed surprised but accommodating. “It would be annoying, but we’re used to smokers getting less space to smoke,” said an IT Technician who works for the Library.

Zine, a U3 Political Science student who was smoking on the terrace, noted that he did not understand why the entire area should be smoke-free.

To accommodate those who would normally smoke on the terrace, the Library will establish two designated smoking areas just outside the terrace: one to the north beside Morrice Hall and the other in front of Redpath Library. The Library will put up signs to distinguish smoke-free areas and areas designated for smoking.

When asked how the smoking zones will be enforced, Cook told The Daily that, “There is no big enforcement, there’s no way that we could do that anyway. This has to be a cultural change. […] It’s a very gentle recognition that we have a problem and it’s everybody’s problem, and hopefully we can create something and keep it very nice for everybody.”