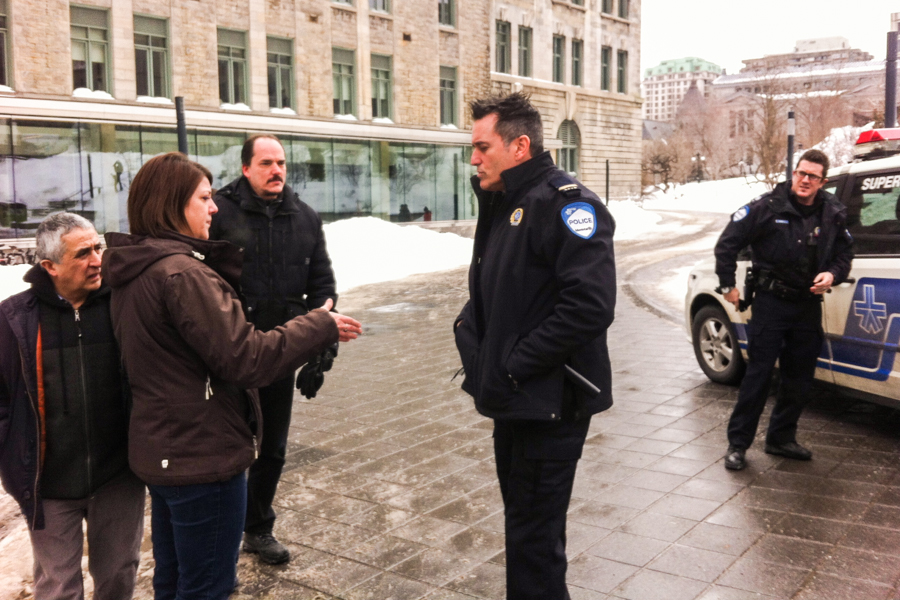 On the heels of the disclosure of access to information (ATI) requests that revealed that researchers at the Aerospace Mechatronics Laboratory at McGill have received over $500,000 in contracts from the Defence Research and Development Canada centre in Suffield since 2004, Demilitarize McGill took action the morning of March 14 to blockade the Laboratory.

The blockade, which took place in the Macdonald Engineering building, was organized by Demilitarize McGill, a campus group that protests military research at the university. It lasted nearly four hours before the Service de la police de la Ville de Montréal (SPVM) ended the demonstration.

“The research creates a process by which McGill invests itself in warfare, because […] military conflicts provide both marketing opportunities and testing grounds for weapons developers and military researchers,” said Kevin Paul, a member of Demilitarize McGill.

“Meaning that McGill benefits when war is being waged by virtue of the wide array of military research opportunities and labs that arguably would not exist without military funding,” Paul continued.

The demonstration remained peaceful for the majority of the time, with most people popping their heads into the hallway to take a gander at the demonstration before carrying on. The Daily approached several students around the site of the blockade for interviews, though they declined to comment.

There were only two instances of brief scuffles between those trying to access the labs and those in the blockade.

One of those instances saw Meyer Nahon, a mechanical engineering professor at McGill, and a researcher with the Laboratory, engage with the demonstrators, telling them that they “have the wrong laboratory.”

Nahon told The Daily that the research being done in the Laboratory “has huge positive applications [and] potential applications. The only way we are going to find out if these applications can come to pass is if we do some research on them.”

“UAVs [unmanned aerial vehicles] can be used in a hundred different ways. Yes, one of those ways is to do [and] cause harm. But there are 99 other positive things that it can do – so does that mean that you do absolutely nothing? That you don’t do the work?” Nahon asked.

At times the interaction between Nahon and the demonstrators became heated; in one instance a demonstrator told Nahon to “fuck off,” and in response to demonstrators taking photos of him, Nahon wrestled a phone out of a protester’s hand, later giving it back.

Nahon insisted several times that he was “personally opposed to military research.” He added that he believed in open, publicly available research.

“In order to assert my own views, to retaliate – because I’m not going to start breaking down the blockade – I feel the best way to fight back against it is to do more of what they don’t want me to,” Nahon said, referencing a claim he made that he would go out and seek further military funding.

Following the blockade, one of the participants of the demonstration stated that they understood where Nahon was coming from, but that they doubted his assertions of academic freedom.

“I think that there is a very strong case to be made that military-funded research is being funded by the military because it obviously has military applications. Certainly that research can be used for other purposes,” the demonstrator said. “That being said, that doesn’t change the fact that the military has technical problems and therefore commissions research and provides funding for research that presumably will help it overcome these problems.”

The participant also spoke to Nahon’s claim that he was morally opposed to military research. “He claimed to have an ethical opposition to military research, I think that […] if that statement was made in good faith […] you wouldn’t do that, even if you were frustrated with us and our tactics.”

“I guess he presents a dangerous and liberal idea, in that the freedom to research what you want is a freedom that trumps all other freedom,” the participant added. “Like the freedom to not be destroyed by, say, a drone.”

Around 11 a.m., two SPVM vans arrived at the scene. As soon as the police moved into the hallway, the demonstrators left, with the SPVM eventually giving up pursuit.

When asked why the SPVM was called to campus, Dean of Students André Costopoulos stated, “The demonstration is always fine on campus, expressing an opinion is always fine – obstruction is where we start having a problem. We have a protocol that says if we have obstruction, we have to re-establish the ability of the University to carry out its activities.”

Costopoulos referenced the “Operating Procedures Regarding Demonstrations, Protests and Occupations on McGill University Campuses,” a document introduced in early 2012 following the occupation of the James Administration building.

The document, which received criticism from student unions, campus groups, and human rights organizations, seeks to govern when and how protests and demonstrations can be held on campus.

In response to the SPVM presence, Paul said, “It sets a precedent that ultimately the University will defend its research activities that are helping the military be able to kill people, through the use of force, [and] through police intervention, repression, and intimidation of students.”