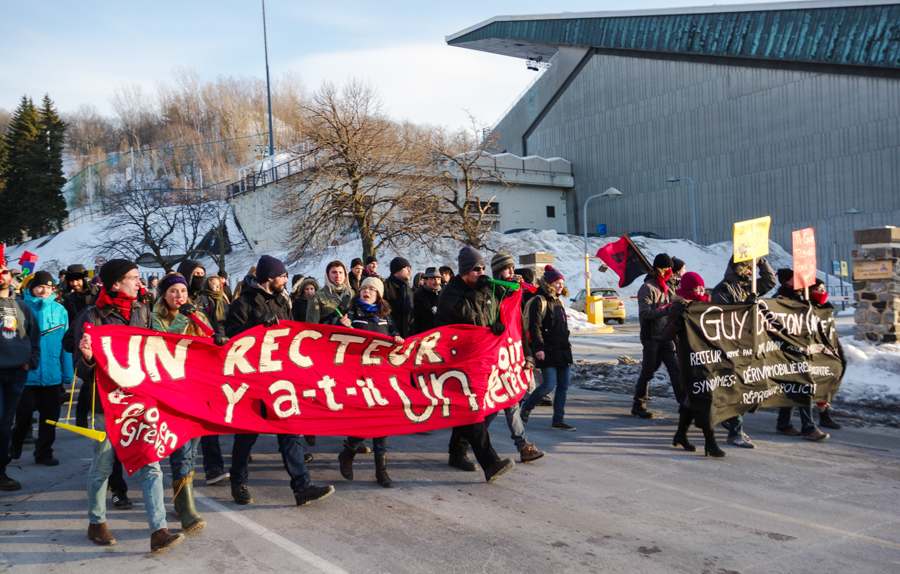 Despite the bitter cold, some 200 protesters marched across the Université de Montréal’s (UdeM) Outremont campus on Monday afternoon in protest of the reappointment of the university’s rector Guy Breton.

The demonstration was part of the backlash against Breton’s appointment, which saw several UdeM student associations, totaling approximately 4,900 members, go on strike.

The protesters gathered outside Édouard-Montpetit metro station at 4:30 p.m. on Monday to march down Mont-Royal to the university’s 1420 Mont-Royal building, later turning around and heading through campus toward the Pavillon Roger-Gaudry.

Confronted by security guards outside the building’s main entrance, demonstrators attempted to gain access through the building’s front doors, but found them to be locked. One demonstrator discovered an unlocked service entrance on the ground floor and the protest moved inside.

After marching throughout the halls on several floors of the building, the protest moved back outside, where demonstrators tore down UdeM flags from the poles out front, and attempted to burn them among cheers from the crowd; however, the flags did not light.

“Guy Breton, démission,” the crowd chanted as they marched, calling for the resignation of the newly-reappointed Breton.

“Me, I’m here today because I was at the Université de Montréal, I was in anthropology, but I had to give it up due to a lack of money,” Cogné told The Daily in French.

“I’m fighting for educational accessibility,” he continued, referring to the struggle over tuition fees.

Cogné was not alone on the issue of tuition fees. Student concerns around the appointment centred on Breton’s record, the “commodification of education,” and the democracy of the appointment process, among others.

“In my opinion, the institution of university should be more democratic,” Cogné remarked.

“It’s completely anti-democratic to have a rector who is nominated and not elected.”

The appointment, completed behind closed doors by the Conseil de l’Université de Montréal on February 24, extends Breton’s mandate to the year 2020, according to a press release from the university dated that same day.

One banner held by protesters called Breton a “rector nominated by divine right to commodify education.”

Asked if he thought protests were an effective way of implementing institutional change, Cogné told The Daily, “I don’t think the rector will retire thanks to our demonstration.”

Still, Cogné said, “I think its important to highlight our concerns even if almost nothing will come of today’s demonstration.”