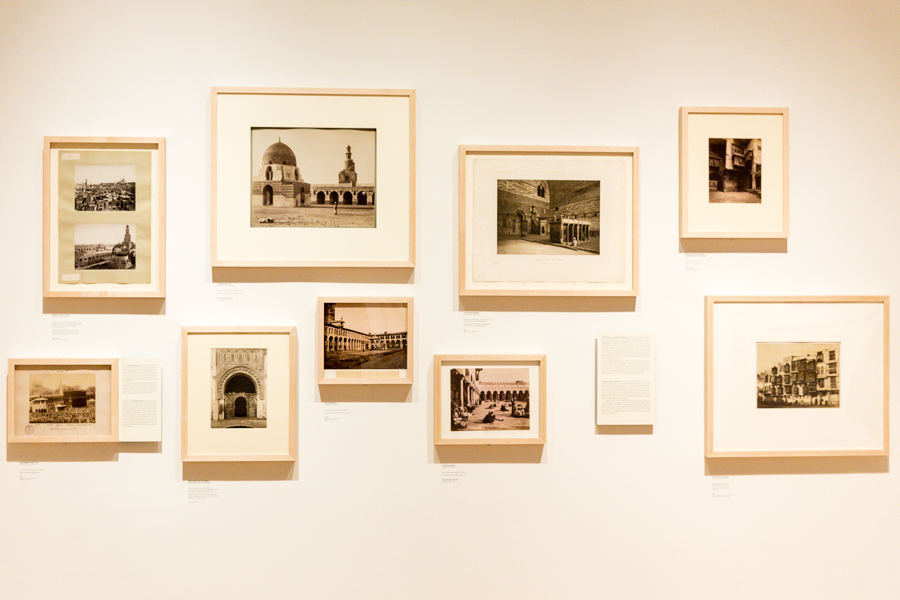 “Photographing the Arab city in the 19th century” takes a critical look at images taken of the Middle East from the 19th century up to the beginning of the 20th century. The show is premised on re-envisioning these early images of Middle Eastern and North African cities outside of the context of orientalism, investigating them for the stories they tell about contemporary urban life.

Upon entering the exhibit, it becomes immediately clear that the photographs can be divided into those re-examining the 19th century Islamic city and those indicating the constant development of photography in use at the time. The collection itself strikes a balance between the Arab city as characterized by the curator – visiting academic Jorge Correia – and its surrounding landscapes, with cities depicted by snapshots, spanning from their stylized alleyways to their enclosed courtyards, with the most personal of spaces sealed away by constructed wooden lattice clinging to the sandstone buildings’ outer walls.

The panoramas of the cities (Cairo generally) are arguably the most breathtaking photos, with countless minarets rising above densely constructed cities in the middle of the desert, with little obvious rational planning at first glance, and nothing separating the urban centre from the desert but ancient decaying city walls. Even beyond the city limits, the photographers’ images capture the dilapidation of colossal domed royal tombs among the empty sand dunes of the Egyptian desert.

The small exhibit aims to tackle the predominantly Western, orientalist perception of the Arab world that characterized the production of these photographs. It is through these images that 19th century Europe indulged what Edward Said, author of foundational text Orientalism, conceived to be “the essentializing of these societies as undeveloped, fabricating a view of culture that can be reproduced.” Many of the photos used in the exhibit were originally created for tourism or academic purposes, distributed and shown across Europe. They helped fashion an immutable view of Islamic culture, defined by its chaotic, ungovernable cities and landscapes, feeding the imperialistic impressions of the people gazing at them.

The collection of urban city shots viewed from a perspective of urban planning are the most fascinating. The distant panoramic views of Cairo at the turn of the century, arguably some of the best images in the gallery, betray the social fabric of the time which was interwoven with the urban scene. On closer examination, the density of these cities becomes immediately obvious, as does their complete lack of linear roads and accessways. Correia describes the cities as pedestrian-based, with only minarets and a few major routes carving through. What was mistaken for romanticized chaos by 19th century Europeans was in fact the result of a largely pedestrian city, organized by social clusters focused on local mosques and the surrounding markets and semi-public spaces contained within them.

The contemporaneity of the photographs themselves goes beyond the time period. Thinking of Montreal, one can’t help but be struck by the uncanny resemblance between the scattered minarets and a city renowned for its steeples. The timelessness of urbanism and the social fabrics the photos display makes this exhibit well worth the visit.

“Photographing the Arab city in the 19th century” is on display at the Canadian Centre for Architecture until May 25. Visit www.cca.qc.ca for more details.