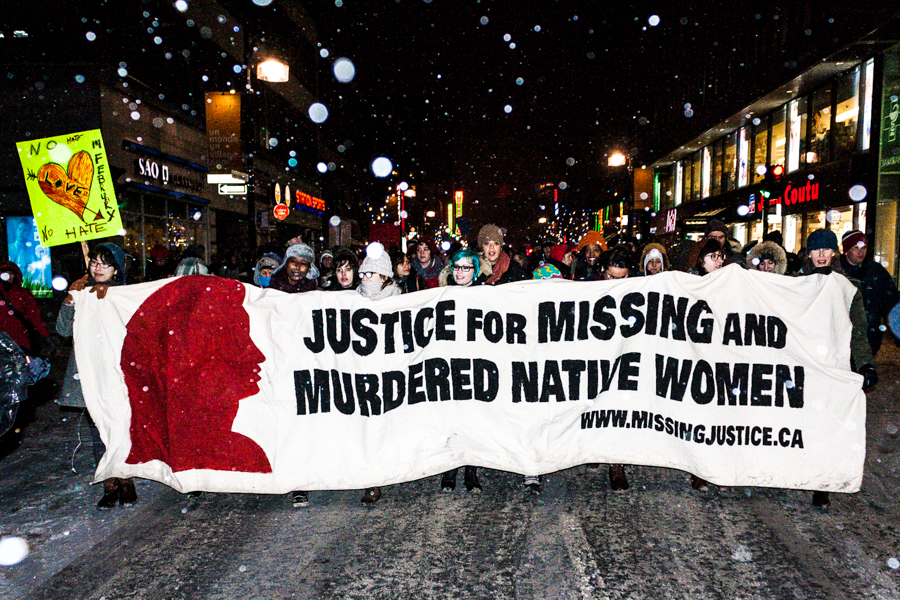 On February 14, over 500 people gathered in the snow at Place Émilie-Gamelin for the annual March for Missing and Murdered Indigenous Women, organized by the Missing Justice Collective. According to organizers’ estimates, it was the biggest march since the collective began organizing it in Montreal in 2010.

The first March for Missing and Murdered Indigenous Women took place in Vancouver in 1991 after the murder of a First Nations woman. In an interview with The Daily, Bianca Mugyenyi, the Programming and Campaigns Coordinator at the Centre for Gender Advocacy, explained the continuing legacy of the event.

According to a 2010 report from the Native Women’s Association’s Sisters in Spirit (SIS) initiative, 582 Indigenous women have gone missing or been murdered, with roughly 75 per cent of those cases estimated to have occurred from the 1990s onward.

Later in 2010, SIS lost its federal funding and was unable to continue its research; however, a similar project was conducted by Maryanne Pearce at the University of Ottawa in 2013. Pearce’s research led to a database that has recorded 3,329 missing and murdered Canadian women, 824 of whom are Indigenous.

This year’s march began with an opening prayer, music from the Buffalo Hat Singers, and motivational words from a few speakers. Maya Rolbin-Ghanie, a member of the Collective, shared with the crowd some of the reasons why she participates in the march.

“I march because we lose track of what is urgent and what is not. Our sense of collective urgency is skewed and stunted. Some would have us believe that violence against women is no longer urgent in these parts, or that it is never urgent when measured against more pressing ‘life and death’ issues like war or climate change. I wish that they understood that dealing with any issue in a vacuum makes no sense at all, and will only create more work for all of us.”

“These marches are meant to symbolize a spirit of women’s resistance, [of] women standing up for themselves – specifically with the goal of being free of violence regardless of race or gender.”

From 6:45 to 8 p.m., the hundreds of protesters took to the streets of downtown Montreal with chants, banners, and flyers. Attendees participated in the march for a variety of reasons. Stephanie Guico of the Montreal organization Head & Hands felt both personal and professional connections to the event.

“[At Head & Hands] we work partly with First Nations populations and First Nations women offering social legal and medical services,” Guico told The Daily. “Also on a personal level, my experience as a racialized minority in Montreal, and to a certain extent having known people who have been marginalized […] I feel a particular affinity with this cause.”
Some demonstrators, like Hannah Harris-Sutro, sought to show solidarity with the cause from other communities.

“I’m here this year, and especially tonight, because there was a demonstration scheduled in the Village by another collective [tonight],” Harris-Sutro told The Daily. “It felt really important to be here as a queer presence […] because I thought that it was just completely inappropriate [for the other demonstration] to be competing with this march.”

The demonstration ended at Place des Arts with more music from the Buffalo Hat Singers, some closing words, and hot chocolate for the frozen protesters.

Addressing the demonstrators prior to the march, Rolbin-Ghanie encouraged people to think critically and empathetically in the face of social issues. “We need to ask ourselves continually and repeatedly, ‘Am I motivated by love or by fear?’ and then make adjustments accordingly.”