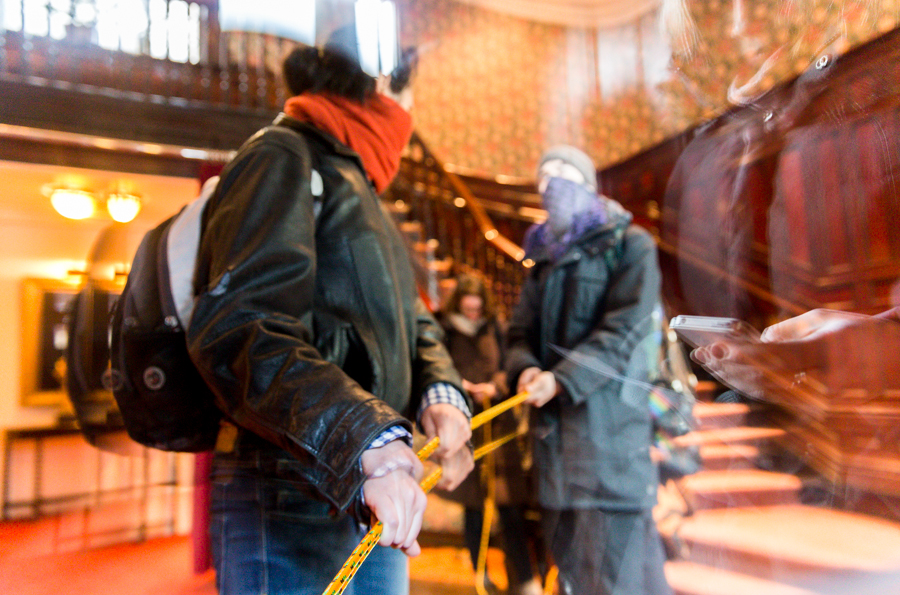 Around 30 students and community members participated in a blockade of the Faculty Club to protest the McGill Institute for the Study of Canada (MISC) Petrocultures conference, which aims to “discuss and debate the role of oil and energy in shaping social, cultural and political life in Canada,” according to their website.

Resistance to the conference

According to the website of the blockade, lockoutpetrocultures.wordpress.com, the resistance came from concerns that the conference “positions support for fossil fuel extraction as one valid opinion among others” while ignoring opinions of environmental degradation and ongoing colonialism.

“MISC [is] creating an environment that condones ‘acceptable’ levels of racism in order to generate interest at the expense of Indigenous students,” Molly Swain, an Indigenous student, told The Daily before the conference in an email.

The blockade occurred just before the conference’s registration at 8:00 a.m. on Friday morning. The group of resisters fastened a rope on the inside of the Faculty Club’s main entrance door. They also blocked each of the building’s fire exits and dropped a banner from the roof that read: “Shut down the tar sands, décolonisons.”

Divest McGill, a group that calls on McGill to divest from fossil fuels, also held a demonstration later that day at 4:30 p.m., this time in front of the Faculty Club. The self-described “counter-conference” asked passersby to write down what a fossil-free future will look like.

“The debate inside is whether Canada is a ‘petroculture’ or not, but the debate we think we should be having is – well, we know we are a ‘petroculture,’ [and] that the Canadian economy and Canadians are socially [reliant] on oil. The question is how to get away from that and move toward renewable sources and away from oil,” Amina Moustaqim-Barrette of Divest McGill told The Daily.

“We stand in solidarity with [the morning demonstrators]. They are there to represent the grassroots movement and that was really poorly represented in this conference. We were inside the conference to continue that conversation,” added Moustaqim-Barrette.

QPIRG McGill also spoke out against the conference in a letter to The Daily earlier that week, stating that it felt the conference “legitimizes a mode of socio-economic organization that is having already-devastating effects on communities and ecosystems.”

The conference featured presenters with experience or expertise on the topic of ‘petroculture.’ Many of the presenters at the conference are directly involved with oil companies and developers although some activists and scholars were also featured.

However, Mona Luxion, one of the resisters at the Faculty Club and a former Daily columnist, felt the event was far from nonpartisan. “There are a variety of types of presenters at this conference, some work directly for the oil industry […] There are people [who are] adamant advocates for fossil fuel extraction, but still aren’t challenging uncontrolled growth that is at the heart of capitalism and is part of the colonialism that goes on in this land,” said Luxion.

“So [in] this debate, the only position available is maintaining status quo rather than striving for ways to get out of an economic and political system that is running into the ground,” Luxion continued.

Shaina Agbayani, a McGill student, agreed that the conference held inherent biases. “The theme of the conference is ‘Oil, Energy, and Canada’s Future.’ But the conference fails in its absence of proper recognition of, and critical inquiry into, [what] this ‘Canada’ is that is being projected and involved in the discussion,” said Agbayani.

“Only 1 of 11 talks at the conference seems to […] include the voices of Indigenous folks on whose territory we reside,” she added.

In response to the blockade and some of the criticism, MISC Director Will Straw expressed his concern with the conference. “I think we have tried to make it [balanced], but you can’t have perfect balance. I do really think we all benefit from hearing a wide range of views,” Straw told The Daily at the blockade.

One of the attendees at the conference found the presentations perturbing. “When I saw his speech, it was very disturbing for me […] I would consider [the presentation] a violent experience,” Indigenous student Tiffany Harrington told The Daily in reference to Sun Media personality and pro-tar sands advocate Ezra Levant’s presentation.

“For me, there were a lot of right-wing sentiments, and they didn’t recognize Indigenous sovereign voices as being able to speak for ourselves. Seeing that [MISC was] only putting forth one point of view I didn’t feel like they were actually opening up any discussion,” said Harrington, adding that MISC also showed “two polarized views that didn’t allow for any consensus on anything.”

Several of the attendees outside of the blockade expressed their discontent with the political actions taken against the conference, with several calling it “immature” and asserting that it was “stifling dialogue.”

“I understand their position; however I think blocking the door and not letting people into a conference that is supposed to be about open discussion and rational debate isn’t a very productive way of supporting or representing your opinion,” Justyna, a Concordia environmental humanities student, told The Daily outside the blockade.

Harrington disagreed. “I think protesting an event like this was a courageous act of speaking up and holding a voice.”

“This is not a neutral debate,” Luxion added. “[MISC has] to understand it is a very political decision to have a conference that debates the role of the tar sands in some sort of ‘both sides are equal’ way, rather than acknowledging [that] the tar sands and global warming are killing people right now, and will continue to do so […] we need to shut them down.”