A system of exploitation 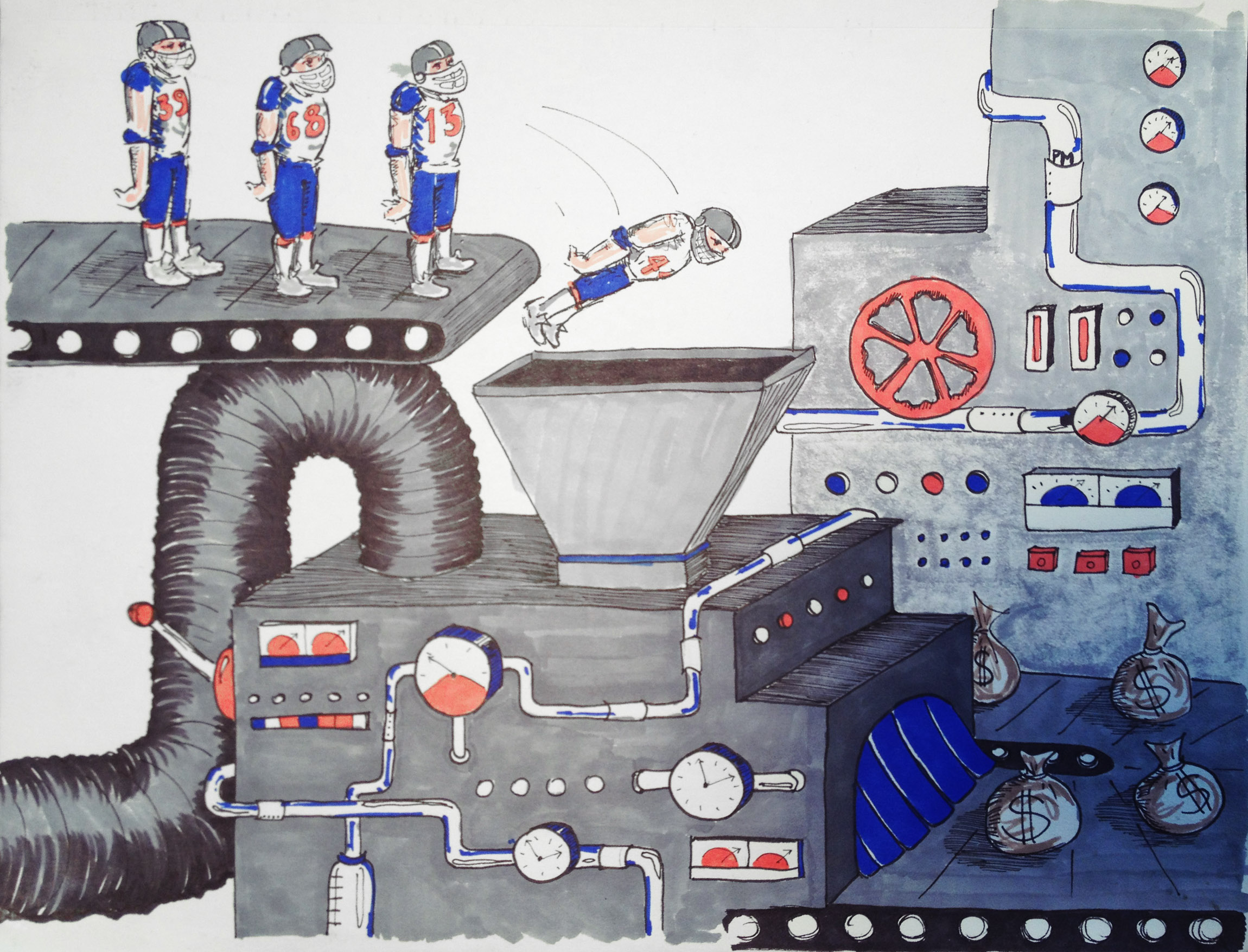 On January 28, a group of football players at Northwestern University, in Evanston, Illinois, announced that they had filed to form a union for college athletes, the College Athletes Players Association (CAPA). These players are hoping to gain support and membership from athletes across the country in football and basketball (though expansion is possible). They hope to gain some concessions from the colleges that they are establishing as their employers, with the biggest request being health insurance for injuries, extending beyond graduation. Though the union is not yet official, this is a huge first step in getting college athletes represented within a system that has for years exploited them.

Yes, I say exploit, because despite what the National Collegiate Athletic Association (NCAA) would like the world to believe, college athletes are unpaid employees. The NCAA contends that they are only ‘student-athletes,’ who are compensated by scholarships and room and board. Yet these benefits monetarily pale in comparison to the hundreds of millions of dollars that many big athletic programs and the NCAA itself gain from these players through tickets, TV deals, and merchandise. It is in merchandise sales that we see the collegiate system at its most nefarious.

Jay Bilas, an analyst for the Entertainment and Sports Programming Network (ESPN), skewered the NCAA’s hypocrisy this summer by posting pictures on his Twitter account that showed the results of certain searches on the NCAA’s online shop. Although the site doesn’t specifically sell the jerseys of individual players (just generic jerseys for each team, with no player names on them), Bilas searched individual player’s names and, amazingly, the results always pointed to that player’s ‘generic’ jersey. For instance, searching for Johnny Manziel, the former quarterback for Texas A&M University, would bring you to all the Texas A&M number 2 jerseys. (Since Bilas’ tweets, the NCAA has stopped selling these ‘generic’ jerseys.) So while the NCAA doesn’t expressly sell Manziel’s uniform, they’ll get the money when you buy that number 2 jersey. Exactly 0 per cent of that sale goes to Manziel. In addition, the NCAA bars players from profiting off of their own fame; Manziel was punished last summer for accepting money in return for autographs. This is twisted logic: the NCAA will unofficially profit off of an athlete, but god forbid an athlete earns money off of their own individual talent.

And, if you’re an athlete who doesn’t become a professional – as is the case for the vast majority of student-athletes – you would never see a cent from your playing days. While some can use their college experience as a springboard to future earnings, there’s a huge class of players who will go into some other profession. These athletes’ packed, nearly year-round schedule, prevents them from having a normal student life or the ability to get a job during school. This leads to many players graduating with a different kind of education than that of a non-athletic student.

Perhaps more troubling is that those who have to stop playing due to injury are often not financially supported for medical costs, and scholarships can often be revoked for minor cause, forcing someone to have to pay their way through the rest of school or leave. All in all, you have a situation where universities draw tons of money from a group with almost no power.

The proposed union would allow these athletes to have a voice in how they’re treated. As it stands, the NCAA can basically do whatever it wants, and challenging its various rules and decisions is very difficult. Just recently, Oklahoma State University basketball star Marcus Smart was suspended for three games when he shoved a fan after a verbal altercation. Smart has no way to challenge the ruling himself; he either complies with the suspension or tries to get the school to appeal on his behalf. While it’s likely small potatoes for Smart, who will still in all likelihood be drafted to the pros, for other players these arbitrary decisions can have far-reaching effects, and at the moment they have no means of personally challenging the system outside of university appeals.

The debate on whether college athletes should be paid has been hotly contested for the past decade or so, almost to a tired ad infinitum. Proponents see the players as exploited and deserving of some small measure for what they produce for the universities; detractors believe that compensation would be financially unfeasible and would ruin the spirit of ëamateurismí within college sports. Intangible arguments aside, the economic arguments against athlete compensation have been debunked; pretty much every university has enough money to compensate their players (one needs only to look at the exorbitant salaries given to athletic directors and coaches, who are often the highest-paid public employees in their state), and richer schools would not gain more of an advantage than they already have in terms of recruiting players.

Regardless of whether this union succeeds in the short or long run, there is clearly a problem within the American college sports system. Not paying athletes is a nice idea, born out of an era when sports wasn’t the gigantic money machine that it is now. The spirit of ‘amateurism’ made sense when an education was the main point of an athletic scholarship, when playing a sport was not the primary reason for attending a school, and when the games weren’t million dollar enterprises. But today, it’s a mask for exploitation, a way for universities to continually bring in another group of profit machines ready to be disposed of without a second thought.