We take for granted that our neighbourhoods – our parks, our streets, the entire network of our city – are planned. Perhaps the first cities began as an organic mass that grew with the influx of people and business, but it wasn’t long before cities became structured and regulated, rooted in maps. This all becomes evident when you look at the detailed blueprints that line the walls of the Canadian Centre for Architecture’s exhibit on Casablanca and Chandigarh’s urban development, “How architects, experts, politicians, international agencies and citizens negotiate modern planning: Casablanca Chandigarh.” Everything from the amount of sunlight that would enter a low-income housing project to the distance an average person might walk on a daily basis is measured out. Urban planning is not really about developing buildings, roads, and parks, but about the people who will build their lives within those spaces.

The CCA’s exhibit outlines the urban planning of these two cities in the post-World War II decolonization period. The great empires of western Europe had bled out their funds and their willpower, consequently losing the interest and the capacity required to sustain colonies that were demanding sovereignty. At the same time, industrialization had caused tenement villages to crop up as migrants arrived in droves to work in the factories. Housing needs became a pressing issue for these cities that were industrializing and consequently experiencing urbanization at an exponential rate. The United Nations began campaigns to improve living conditions for colonial countries all over the world as increased exposure showed the crowded, unsanitary, and difficult conditions of these neighbourhoods. International agencies began to produce treatises that denoted the poor living conditions and made proposals for change eventually supported by the U.S., a newly-ascended world power. Jacob L. Crane and Edward T. Paxton from the United States’ Housing and Home Finance Agency wrote about the housing crisis and the global call to action that the developed world was participating in. Their article, along with many others, is displayed on the round white table as you first enter the exhibit. 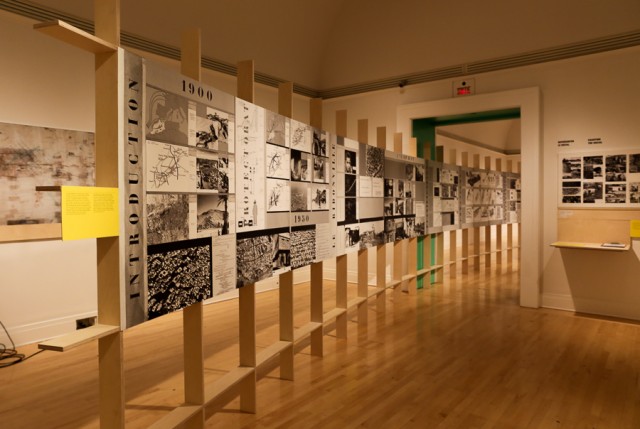 The main room highlights the global trend of such urban planning projects, placing Chandigarh and Casablanca within a context of similar developments. Despite these cities’ development during a similar geopolitical era, their modes of execution were vastly divergent. Casablanca had already long been a city of great importance in Morocco. From the years 1917 to 1957, the population had risen from 82,500 to over 550,000 people due to rural to urban migration. Chandigarh, however, was a city planned from its very inception. Rather than choosing an existing city as its capital, the northern Indian province of Punjab built Chandigarh from scratch to fulfill this administrative purpose.

In the midst of all this decolonization, it would seem incongruous that Western urban planners and architects became the leaders of third world urban planning. Charles-Édouard Jeanneret-Gris, better know as Le Corbusier, the chief of architecture for Chandigarh’s development, was Swiss-French. Michel Écochard, a Frenchman, acted as the director of Morocco’s Service de l’Urbanisme and took charge of the Casablanca project. The effects of imperialism did not end when former colonies became sovereign, so it is not surprising that the imperial powers still had a finger or two in their colonies. Yet the CCA’s exhibit sets out to show how decolonization altered imperialistic attitudes and, for the first time in a long time, local needs were given consideration ahead of the interests of the foreign powers.

Yet the CCA’s exhibit sets out to show how decolonization altered imperialistic attitudes and, for the first time in a long time, local needs were given consideration ahead of the interests of the foreign powers.

Écochard was known for his intensive research into the quantitative and qualitative elements of Moroccan life. He not only looked at the type of land, its unique topographic features, and the amount of people who occupied the space, but used photography to document people going about their daily lives and sent out questionnaires to try and understand how people used the spaces they inhabited. Écochard set out to meet people’s specific needs, not the needs of an assumed ‘universal, rational man’ created by the West. Similarly, Le Corbusier had young Indian professionals on his team, engaging with and influencing Chandigarh’s planning and development. While the West still occupied the leading role, it was clear that the power dynamic between the developed and the developing world was beginning to change.

The intricate planning of these cities and their neighbourhoods revolved around local needs. For example, Écochard noted that pedestrians made up 53 per cent of deaths in Casablanca’s car accidents, a clear sign that the roads needed to be redesigned in such a way as to make walking safer and driving less hazardous. Detailed roadmaps of the city are splayed out along one of the exhibit’s walls, showcasing the differently sized streets, ranging from fast and public thoroughfares such as highways and boulevards to smaller streets intended for residential neighbourhoods. Schools, hospitals, administrative centres, markets, and other facilities were all carefully conceived to serve the needs of the communities planned around them. Chandigarh’s University of the Punjab and capital buildings are marked out along the walls in as much detail as the satellite towns for specific industry and low-income housing are. There was just as much care to the common, every-person life as there was to the grand and luxurious buildings that would serve high-ranking civil servants and educated professionals.

The detailed diagrams, blueprints, maps, and photographs give visitors a concrete understanding of the projects undertaken by these teams. The personal notes scribbled in the planners’ and architects’ barely legible handwriting give you an insider’s view into these cities’ transformation. Yet these papers and plans are meaningless without the voices of the people who actually lived in the city. The back wall of one of the rooms projects a video of Chandigarh everyday life. People crossing the street, taking the bus, going to work, to school, home, shopping. All of that banal, normal stuff we are so familiar with in our own city. Unfortunately, none of these people are given a chance to speak in the exhibit, a crucial omission that keeps the scope of information presented far narrower and far more Western than it should be. As much consideration as it seems these European urban planners offered to the residents of these cities, does it matter if we don’t know whether they wanted it in the first place?

“Casablanca Chandigarh” runs until April 20, 2014 at the CCA (1920 Baile). Admission is free for students who present valid student ID.