The power of the picture

Images of poverty and conflict at the World Press Photo exhibit 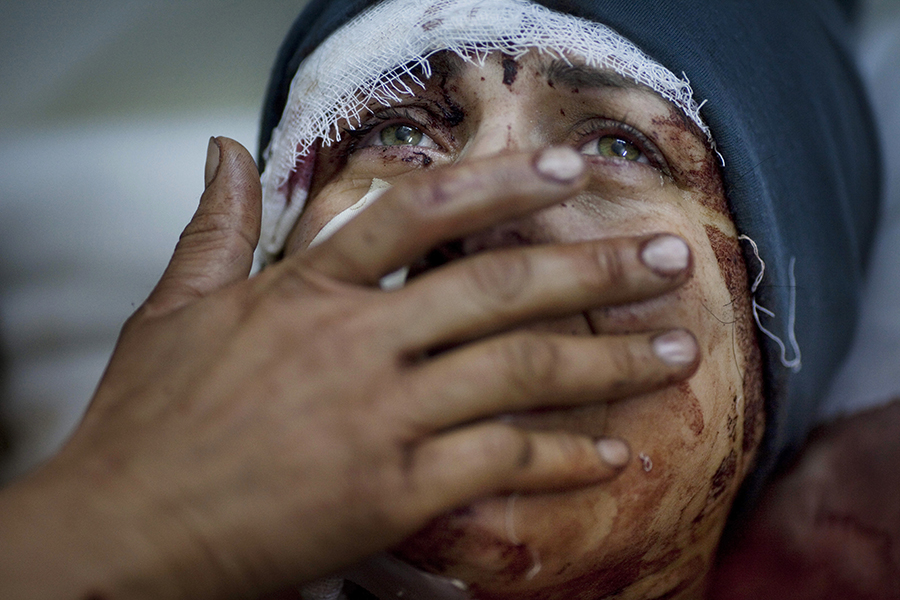 After being bombarded by so many facts, the realities that exist beyond our direct experience risk losing their tangibility. But the World Press Photo exhibit, featuring the winners of the organization’s prestigious photojournalism award, shocks us back into understanding. Cold numbers on a piece of paper mean nothing compared to the image of the body of a dead child held by a grieving family member, even if it is one casualty among thousands. The World Press Photo exhibit, which wrapped up last weekend, confronted us with the faces of people who live the tragedies most of us can barely grasp.

The exhibit was crowded but silent. People stared, awestruck, at large photos set against a white background. One accompanying blurb explained that the teary-eyed woman staring out at the crowd is Natalia, a 15-year-old addicted to crack and living in the slums of Rio de Janeiro. Another informed us that the little girl in the sink of a dirty kitchen resides in a three-bedroom apartment along with 21 other people. Aesthetically pleasing, intellectually stimulating, and emotionally charged, the photos that surrounded the peaceful gallery commanded the viewer to care about what was once in front of the lens.

Abuses of women’s rights featured prominently in the 2013 exhibit. Ebrahim Noroozi’s photo series of Somayeh and Rana, an Iranian mother and daughter disfigured by acid burns, was among the most moving of the photographs. The burns were inflicted on the pair by Somayeh’s husband after Somayeh requested a divorce. A photo of Rana giving Somayeh a kiss on the cheek is at once heartwarming and heartbreaking. The familiar love between a mother and her daughter bridges the gap between the viewer and these women who live in a society vastly different from our own. Significantly, Noroozi does not cast these women as powerless victims, but as dignified survivors. It fills the viewer with rage, pity, sadness, and a deep, guilt-filled sense of relief to know that we have by chance been born to a place where such horrors are less known. While for us these photos are simply an afternoon in an exhibit, the situations portrayed remain all too real once the lens is turned away.

The photo series at the World Press Photo exhibit were not grouped thematically, a wise curatorial choice. The emotionally draining photo series of global poverty, conflict, and patriarchy were separated by beautiful photos of wildlife: penguins waddle around a pristine snowscape and sea creatures float in meditative blue seas. Sports photos showed graceful gymnastics, powerful triumphs of matadors, bull racers, and fencers. Both refreshing and relieving, it was wonderful to admire the pure aesthetic value of these lighter photos.

Whether they were focused on humanitarian crises or the natural beauty of our earth, this year’s photos opened the viewers’ eyes to the unfamiliar. They gave value to the subject present in front of the lens. They let us see more of our own world and prompt us to feel connected with the other beings normally out of sight.