The Middle Eastern musical revolution will not be contained 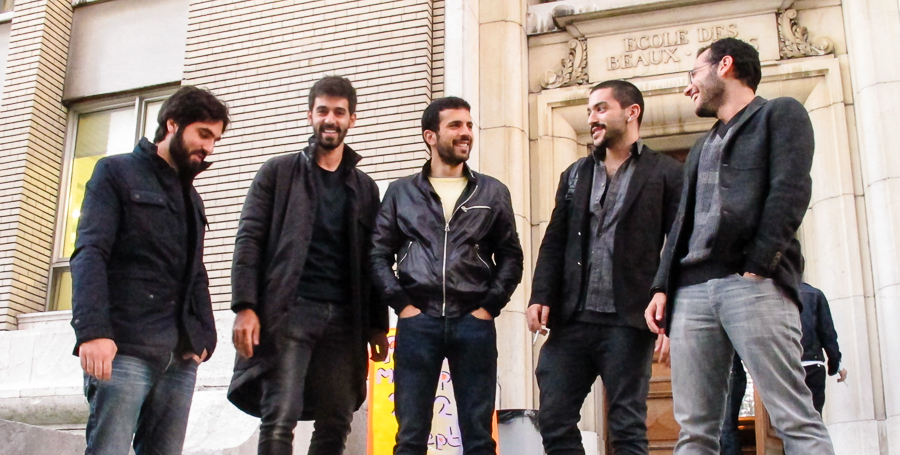 “We’re not a political band, we don’t make statements, we don’t work with a one track political ideology,” asserted Hamed Sinno, vocalist for the now internationally recognized Lebanese band Mashrou’ Leila. The band just released their third album, Raasük (“They Made you Dance” in Arabic), and are currently in the middle of a multi-city tour promoting it; they’re headlining in Montreal, Toronto, Paris, London, and Barcelona, to name a few.

Mashrou’ Leila grew out of an open invitation, in February 2008, by former band members Omaya Malaeb (keyboardist) and Andre Chedid (guitarist), as well as on-going member Haig Papazian (violinist). They were looking for musicians who wanted to jam and vent due to the ongoing unstable political situation in Lebanon. The band’s still going strong, starting 2013 with a dose of well-deserved international critical recognition.

When asked about what had changed since the initial inception of the band, Sinno and guitarist Firas Abou Fakhr unanimously exclaimed, “Everything.” Obviously the line-up has changed; they went through three bassists before they found Ibrahim Badr, whom Sinno proclaims “is a gift.” But neither of the two can really put their experiences into words. “It’s like asking you how much of your self has changed over the past five years […] Our job is going into a room and talking about what goes on in our heads, and in five years your head isn’t in the same place.” One thing that has stayed the same, however, is their wholehearted commitment to keep on creating art through music. Inevitably, says Sinno, letting out a wistful sigh, “The way you look at politics changes, the way you kiss someone changes, the way you dress, the way you carry yourself on stage, the way you carry an instrument, the kind of writing you do, everything changes.”

“The good thing is when the lyrics are so powerful that they become conveyors of a message […] it means that the album demands attention, whether it’s [one way or another],” Firas confessed, when asked what their stance was on the new album being called political. For Hamed, it depends on a person’s definition of politics, “[…] It’s not like we’re working with a particular track of socialism we’re trying to get people behind.” They both agree that everything is inherently political, and Raasük can be interpreted in that way. The album is dense with layers of themes and issues ranging from existentialism, finality, nostalgia, government critique, the Arab Spring, Lebanese singers with closeted sexuality, love, loss, and lust, among others. It took Mashrou’ Leila roughly three years to finish recording and producing Raasük, all without the help of a record label. Instead, they launched a massive social media project entitled #occupyarabpop, a crowdfunding project aimed at keeping the album contract-free, an independent work of art. They managed to raise approximately $66,000, which went into advertising, producing, and designing the album; their “biggest endeavour yet,” Abou Fakhr said.

Everything seems to have a hashtag nowadays, and the band wanted to draw on the ones coming from their region as inspiration for #occupyarabpop. “Whenever you saw #occupyGezi or #occupyTahrir, it became clear that was there was a discourse and people were trying to to occupy it,” Sinno explained, “Without trying to belittle the political aspect of that, we were trying to show people that there was a dominant discourse of clear economic restrictions of what we could and couldn’t do [as a band in the Middle East].” The fact remains that there isn’t a space for alternative or independent Arab bands to get recognized on a large scale, and Mashrou’ Leila wants to be part of the movement to change that, “[allowing] non-commercial or independent bands to be able to exist in the Arab world, and to be able to sustain themselves across countries,” as Sinno says. They want to occupy Arab pop. They want to try to turn the industry on its head, satirize it, critique it, shame it, and hopefully change the way things work in Lebanon, and across the Middle East. Whether this can actually be done remains to be seen.

Right now, if an artist wants to make it big there, they need to be signed to a huge local label. One of the most notable of these, Rotana Records, can be likened to an Arabic pop music factory. Roughly the same songs, with the same beat, are sung by different artists who all roughly look alike (blame plastic surgery). No variety, no individuality, just the usual Middle Eastern percussion, and the same charming bearded man the song is about in the music video. The industry wants to commodify artists, and put them on the market, wholesale, for consumers to purchase. Mashrou’ Leila is looking to find a loophole.

“This album was the first album we wanted to release on an international level with international standards; we wanted it to sound like a record that could potentially be played anywhere,” Abou Fakhr told The Daily. That is why they chose to record the album, in its entirety, in Montreal, to the band’s immense satisfaction. “It just sounds better. When you [play it on] on a [larger] system, you feel a big difference.”

Montreal, they both claim with beaming faces, has been amazing. “It’s very inspiring being here, and there’s a lot of good music in this city,” Abou Fakhr asserted. This definitely comes through when the third album is compared to the first two. There is a grounding of music, an all enveloping experience of sound that just feels right. It feels like they’ve hit home. To Sinno, it was interesting gauging people’s sensibilities here because of the entirely different political climate, “…It helps to understand why things are the way they are back home.” Things take on a more serious air when they are asked about the Charter of Values, in light of Sinno’s personal advocacy for a Lebanese secular state. He blatantly proclaimed that, “There’s a difference between secularism and fascism. There’s a difference between saying secularism is how the law is going to operate, and saying that being a secular believer is how every individual needs to function.” He went on to say that, “It seems as absurd to try and impose something like that as it would be to flip it around, where you’re operating in a country with an Islamic majority and they say you’re not allowed to walk out without a Hijab.”

Sinno’s sexuality and the band’s politics used  in Western media to put Mashrouè Leila in the “controversial” category. Sinno thinks that the band can never be portrayed objectively by any form of mass media. “You need a line that grabs the reader to read the rest of the article, and unfortunately talking about [the] recording process isn’t going to do that for most people,” Abou Fakhr added.  Mass culture is formulaic, “but it’s not without merit,” said Hamed. By their reasoning, these newspaper articles aren’t lying, they’re just choosing to say some things and leave other things out. “One of the things we’re proud of is being portrayed quite straightforwardly…” Any publicity is, essentially, good publicity.

One thing the band won’t assume responsibility for, Sinno affirmed, is being considered role models. “I don’t think that would be very fair, and I don’t think it would be possible to wake up in the morning and get up with that kind of pressure. [But] I think these things happen to all of us, we all have arbitrary role models growing up. I wanted to be Kurt Cobain for two years in high school.” For Abou Fakhr, the impact they’ve had is clear to them and is still important, but it does not factor into whether the band should limit their behaviour. Sinno maintains that if self-censorship ever happens because of this, then the power the band has would to start to fade; they just wouldn’t be them anymore. “We are who we are, and we’re proud of [that], and people like who we are. But apart from that, the only thing that’s good about [being role models] is that it motivates people to try to be musicians, which we think is a great thing.”

The first single off Raasük, “Lil Watan” (“For the nation”), tells the story of propaganda, smooth-talking politicians, indoctrination, and mass distraction. The beat is synthy, more pop than most of their songs, but a welcome addition to the growing diversification of their music. Moreover, it is further proof that Mashrou’ Leila cannot be boxed into a specific genre. The video for the song revolves around a belly dancer, representing the top-down distraction. It also parodies 1980s and 1990s Lebanese music videos. “You see a bunch of people on stage with a very low budget backdrop and there’s a belly dancer…” explained Sinno. Effectively, Mashrou’ Leila is satirizing the entire Lebanese music industry, while also critiquing local politics. For Abou Fakhr, making the video was a highly enjoyable experience, “[…] I like that the band isn’t very foregrounded in the video. I like this idea of slowly disappearing as opposed to [our] other videos, which were very much focused on […] who the band was and it’s identity. [Now] we’re starting to move away from that, even in the music.”

When it comes to their new-found international recognition, Sinno confessed that it all seems surreal, “Suddenly when we talk about our fans and our families, it’s not just in the Middle East anymore.” They claimed this has only happened out of the good grace and fortune of somehow making the right consensus-based decisions between the five of them. “A lot of the reason we’re here is that [we just happened to make] the right decisions at the right time.”