An app for everything

Clicking through the graveyard of broken dreams 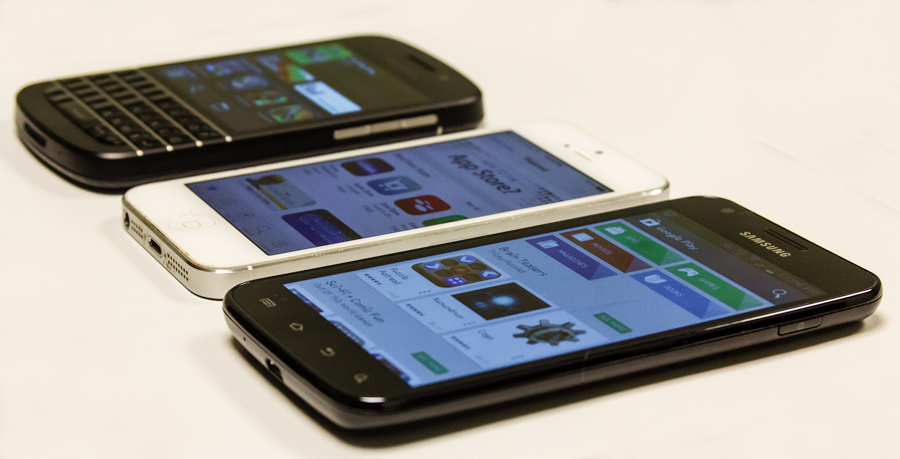 An app for a harmonica, various woodblocks, iBeer, a flashlight, and a slew of other mobile applications (or ‘apps’) fill up the digital shelves at the Apple App Store, Google Play, and BlackBerry World to occupy and waste the time of their would-be users. Currently there are more than one billion smartphones in the world and over one million apps on Google Play alone. These numbers are only going to increase as more and more people use their phones instead of computers. The Daily looked at some useful, and not so useful, apps being developed in Montreal.

Apps have risen in popularity over the last few years mainly due to the increased capability and lowered prices of some smartphones. Scalable cloud computing services reduced the cost and hassle of hosting and open-source tools. Libraries also decreased the amount of time needed for development. The recession reduced the chances of getting a job, liberating many people’s free time. There has also been an increase in start-up accelerators such as Y Combinator, 500 Startups, and Montreal’s FounderFuel, whose month-long boot camps are designed to help small (mainly software) businesses succeed, and hopefully create the next big thing. All these factors create an environment with an increasing number of solutions to a decreasing number of problems.

The app market is notoriously tough, and you need some luck to succeed if you are not a big name. About half of all app revenues are made by just 25 gaming and entertainment companies such as Rovio, Zynga, and Electronic Arts. With that in mind, The Daily talked to a few foolhardy app companies in Montreal on how they are attempting to make a splash in the ever growing pool of the app industry.

Kutoto is an app designed to create a marketplace to get tasks done locally and by trusted people. This app provides a digital space where people can post and bid on services such as: cleaning an apartment, a lift to the airport, or fixing a sink. Julien Cassis, a McGill graduate who co-founded Kutoto, told The Daily that he chose to develop this app because he believes apps are poised to become more location specific, always on you, and simple to use.

Kutoto is not unique and is competing head-to-head with other apps such as Bidzy, Zaarly, Thumbtack, Redbeacon, eBayHire, Angie’s List, TaskRabbit, Exec, and many more.  After about a year of running the app the founders realized that the majority of sales were driven by cleaning homes, so Kutoto did what is called a ‘pivot’ in start-up lingo. A pivot is when a company changes its main business strategy to a different one, in this case cleaning tasks, instead of persevering with their original business model. They now have around 200 users and Cassis remains optimistic on Kutoto’s future.

After hearing that a friend’s cherished bike got stolen, Alex Petraki – another McGill graduate – decided to set up an app to help prevent bike theft called BikeWatch. Bike thefts are common in Montreal, with more than 2,500 bikes lifted each year. However, police estimate the actual number is likely higher as people sometimes do not report the thefts. Petraki first tried to simplify the process of filing a stolen bike report with the Service de police de la ville de Montréal (SPVM), but hit a roadblock with their internal policies. So instead, he made BikeWatch as an app to let bike owners in Montreal know when a member of their community had their bike stolen. The goal is to have other cyclists act as lookouts for a stolen bike, monitor dangerous locations, and take stock of their bikes. It also acts as a social media platform where people can sell bikes or parts and exchange messages. BikeWatch has roughly 1,000 users; no word on if it has caught any thieves yet.

The next app looked at had a bit more traction and was OOHLALA, an app to connect and enhance your campus life. This app is used by students to manage hectic academic and social lives, in order to get the most out the university years. We sat down with Danial Jameel, one of the co-founders and a University of Toronto graduate, who decided to centre his company in Montreal because of its student density. This is Jameel’s third startup, and OOHLALA grew out of one of his previous projects – a website designed to offer discounts to students from local merchants. After working with student councils he realized a disconnect between how the University distributes information and how students actually get it. Today’s information is fragmented and instant, and this app was created to help collect all this information from personal schedules, club events, social activities, and friends’ availabilities into one dashboard. OOHLALA now operates on over 50 campuses across Canada and the United States, with their strongest presence in Toronto and Montreal. It is popular among first-year students, as one in four at the University of Toronto and McGill are trying it out.

Only about one in ten start-ups survive, and the back pages of an app store are becoming a graveyard of unused apps. Even those chosen by tech experts don’t always succeed. FounderFuel, a highly selective local Montreal accelerator, had 30 per cent of the companies that successfully completed their boot camps in Fall 2011 and Spring 2012 go out of business.

Of the 100 billion apps that are downloaded each year, many are tried once and then forgotten.  For an app to stay relevant, it needs to provide something different from the million other apps that are a click away. Yet the reality is that most apps are repetitive and do not provide effective solutions to any real problems. Only time will tell if these Montreal apps have what it takes to go up against the giants.