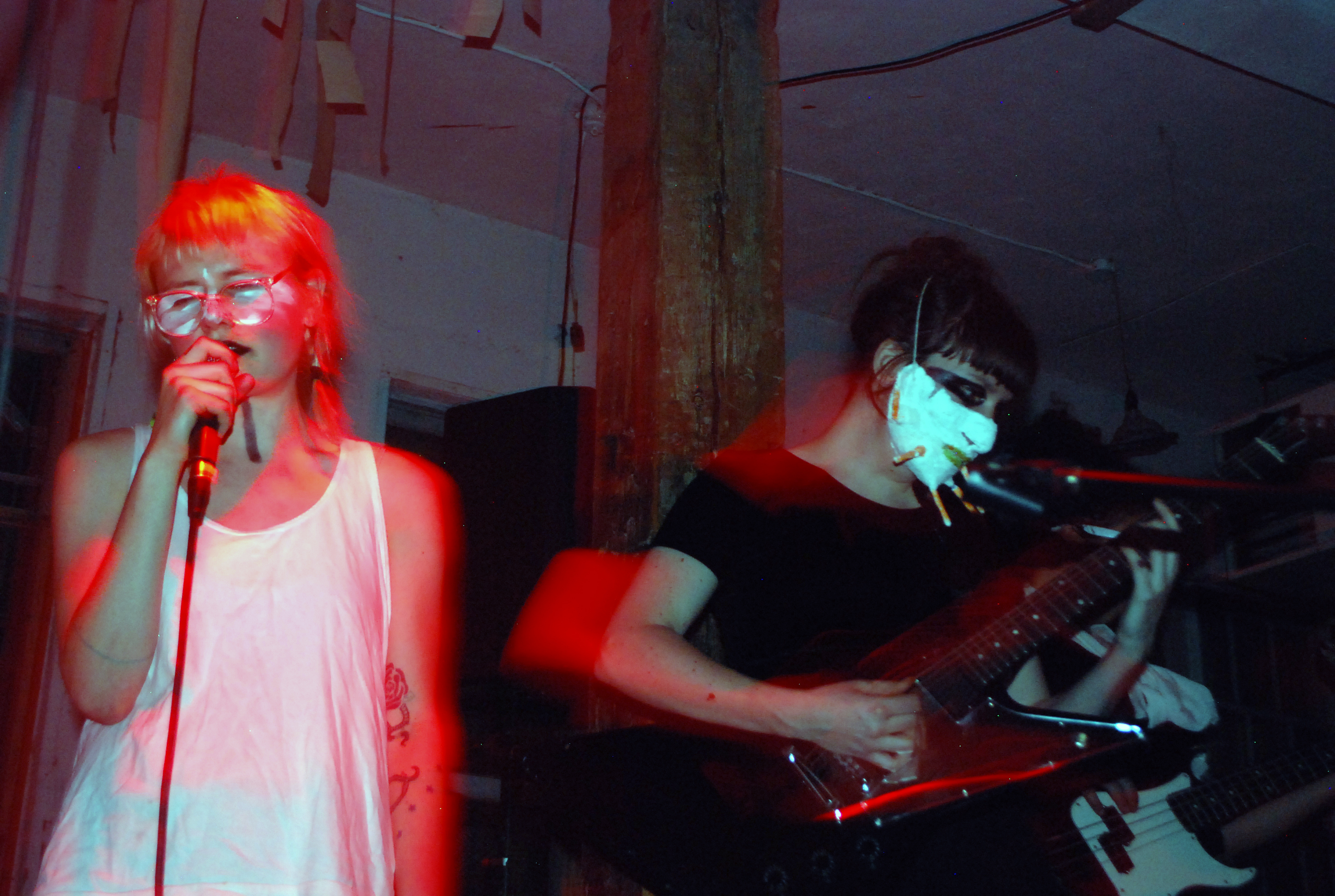 “Sorry for your ears,” says Anna Pringle, one of the two singers in the eight-person band Fem Maggots. It’s a warm evening in early May, and I am starting to rethink my decision to sit cross-legged directly in front of them as they practice for an upcoming CKUT 90.3 radio appearance. The band launches into “Parrot,” bombarding the small space with frantic noise. Pringle, and Grace Brooks, the band’s other vocalist, sway side by side, with their eyes closed and their faces contorted. “Scream scream / get me out of here / get me out of this cage / get me out of here,” they repeat over and over. When I look away, it sounds like 200 screaming voices instead of two.

Newly formed, Fem Maggots is a female/female-identified/queer band that is quickly making a name for itself in the Montreal music scene. Channeling the spirit of Riot Grrrl – the 1990s feminist punk movement – Maggots’ sound blends equal parts joy and rage, resulting in a ragged wall of sound that’s punctuated by screams and chants. Staunchly feminist and anti-capitalist, they monitor their musical message seriously, infusing their music with frustration and political struggle. And yet, for all their seriousness of purpose, they do not take themselves or their band too seriously; at shows, they’ll draw on moustaches and unibrows, paint their faces, or strap on surgical masks. Pringle has been known to dress up as Prince. The wild costumes hype up the band and help make the performances genuinely performative, explains Marie Deckers, who plays accordion.

The crazy costumes and jokey attitude also serve as an important foil to the thoughtfulness and carefully channeled fury that fuels their music. As Brooks puts it in an e-mail, Fem Maggots are, at the core, about “expressing rage,” but also about “creating an auditory world that expresses deep unease and a good dose of weird humanity.” At a recent show at La Brique, as the thrillingly female and queer mosh pit surged up towards the Maggots, this humanity was on full display. Fem Maggots and the crowd moved together, in conversation, energized, angry, and euphoric.

The idea for the band was hatched in an apartment shared by bassist Anniessa Antar, keyboardist Portia Larlee, guitarist Kaity Zozula, and Pringle, who discovered their shared dream of starting a band during late night pillow talk sessions. “We wanted to invite every cool woman, or woman identified person, or queer person we knew to be in [the] band…,” says Zozula. “I think there were probably 15 people asked at the beginning.”

The band eventually boiled down to its current members, adding Brooks after they leapt out of their seat while watching Fem Maggots practice at a cafe and spontaneously began singing along. Some of the Maggots have been involved in music before, but for many, the instrument they play in the band was new to them. Antar, for example, had never played the bass until joining the band. Creating a space to learn and make mistakes is a core Maggot value, an answer to a music scene that can be exclusive and unwelcoming to new musicians. “I’ve often felt unsupported [being] a beginner musician in different male dominated music scenes in Montreal,” explained Candice Cascanette (who plays electric guitar and noise flute) in an e-mail. As newly minted drummer Julia Yudelman put it, “[Fem Maggots] felt like a space to experiment, like a safe-space. Most of the time in bands you get judged super hard.”

Screaming, thrashing, and dressed to distress, Fem Maggots take up a lot of space, and they know it. Pringle explains: “I think we really dissect what we’re putting on the stage. I still personally feel uncomfortable sometimes taking up space and performing. I’m not sure that I’m someone that should be onstage or if it should be some other voice expressing some other struggle.” One of the best things, they say, has been the effect Fem Maggots has had on its audience. “[People have been saying,] ‘hey, I want to do this too!’ Having that idea planted that anyone can create, anyone can use space, anyone can get on the stage and say ‘I don’t have to watch, I can say what I want.’” This sentiment seems to encapsulate a lot of what the Maggots are all about. Of course, you could also put it more lightly, as Antar does when she jokingly says of the band: “It’s just like cool chicks learning shit together, y’know? Beautiful.”