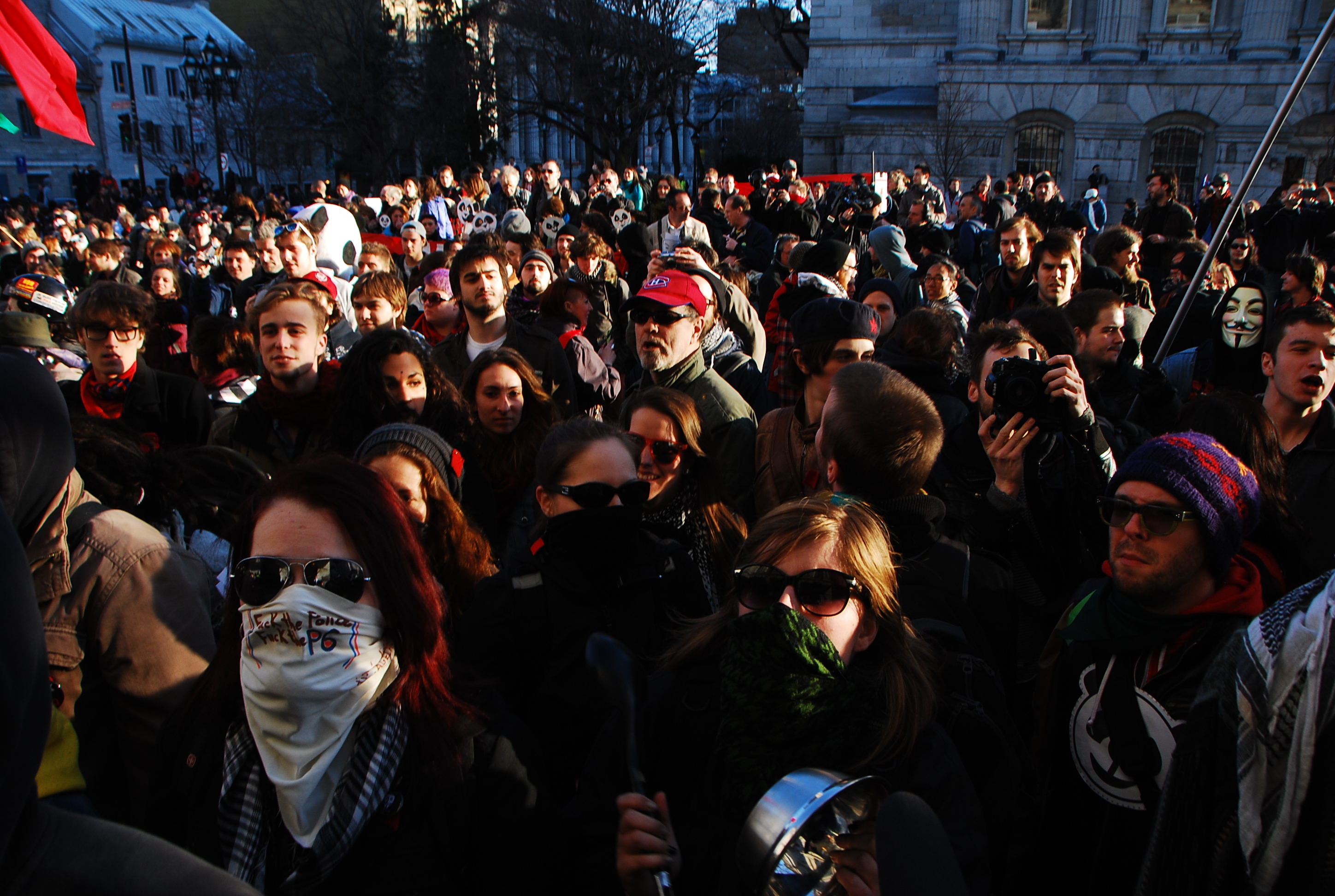 At a press conference on Tuesday, Montreal Anti-capitalist Convergence (CLAC) spokespeople stood alongside representatives from some of the 62 organizations that have signed its declaration to oppose P-6, a municipal bylaw that institutes fines for protesters wearing masks or other face coverings and declares all protests illegal if their route is not pre-approved by the police. The organizations each took their turn to express why they opposed the bylaw, which was up for repeal by the municipal council on Tuesday night. After hours of gruelling debate, however, the motion eventually failed, leaving P-6 intact.

While P-6 has been in effect since 2001, the municipal government amended the by-law last spring in the midst of the student strike. It began to draw particular attention after the annual anti-police brutality protest on March 15, when the Service de Police de la Ville de Montréal (SPVM) used the recently amended bylaw to shut down and encircle the protest within minutes and give out $637 fines to all the participants. Since the SPVM began enforcing the ticketing provision of P-6, several hundred people have been kettled and fined under the bylaw.

A representative from QPIRG Concordia called P-6 “kafka-esque,” adding, “A lot of journalists [have been] saying ‘well it’s just a simple notice you have to give the police, I don’t understand what all the problems are’.”

“[One person] put forward the parallel of, how would journalists feel if they had to submit their articles to the police before they could be published, because we all know words have the potential to create just as much unrest as any demonstration,” they said, adding, “What I’m sure many here would agree would be a very kafka-esque, burdensome, bureaucratic procedure is just as burdensome and kafka-esque to peoples’ ability to assemble peaceably.”

An activist from Solidarity Across Borders spoke about why it is important for people to be able to protest peacefully without fear of being processed and ticketed by the police, particularly for those people who live precariously in Canada.

Since the amendment of P-6, the bylaw and other activist movements have become inextricably intertwined. April 22 is not just the anniversary of one of the largest protests in the history of Québec’s student movement, with hundreds of thousands of protesters marching province-wide in honor of Earth Day as well as against the Liberal government’s proposed tuition hike in 2012. It was also the day that Montreal’s municipal council was slated to hear a motion from municipal party Projet Montréal to repeal P-6, before the vote was postponed to the next day because of the number of other items on the council’s agenda.

Projet Montréal released a statement on its opposition to P-6 that quotes Alex Norris, municipal councilor from Mile End and author of the repeal motion. “Projet Montréal has always been reticent at the idea of making the right to manifest in public places more constrictive,” he said.

“We believe firmly that we should…repeal [municipal bylaw P-6], which was adopted in the midst of last spring’s student movement, which was drafted hastily and which plays with the democratic rights of the citizens of Montréal,” the statement concludes.

At 7 p.m. on Tuesday, the municipal council returned from a break and was then opened up to questions from the public. As the public question session approached, around 700 demonstrators gathered outside City Hall in protest of P-6. SPVM officers moved in to block off the entrance to everyone except people who were chosen by a lottery to be able to ask questions.

The crowd moved in on the officers, chanting, drumming, and bull horning just inches from their formation. After several minutes of noisemaking, police reinforcements arrived to push the protesters back and allow the people who had won had reserved their seats in the City Hall gallery.

“City Hall is supposed to be the house of the people,” said Norris in French at the meeting, “and tonight people who wanted to ask questions at this council were blocked entry by the police force. Is this something the municipal council will address?”

Harout Chitillian, the city council chair, responded that the council would “look into it.”

“That shouldn’t happen,” said Chitillian, “but it is the police force’s responsibility to make sure that everyone’s safe, and they have to be free to do their jobs effectively. If they have a concern about security, they have the right to act on it.”

Although the subsequent question period covered a wide range of topics, the most popular was P-6, so much so that many of the people towards the end of the list, all of whom had questions on the municipal bylaw, did not get a chance to address the council.

The first member of the public asked his question about P-6 of Louise Harel, who is leader of the official opposition party, Vision Montréal. Harel replied that it would be “irresponsible” to repeal the law without leaving behind some form of regulation.

“Before it was amended to its current version last year, P-6 has assured the security of the people. We have to go back to the P-6 of 2001,” she said in French. “There have always been regulations, and at times the regulations have been excessive. I was part of the student movement when there was a regulation that declared protests illegal, period.”

“We need some kind of regulation,” Harel added, “but we have to fix its implementation and go back to what it was in 2001 and what it’s been for the past twelve years.”

François Genest, a Montréal activist, was the last person permitted to ask a question. His, directed at Montreal mayor Michael Applebaum, focused on Projet Montréal’s motion to repeal P-6. In response, Applebaum said that the police were responsible for “judging when [P-6] should be implemented, and how.”

Among the 25 who voted for the motion were all ten Projet Montréal municipal councillors. Vision Montréal, the official opposition, was split. Its leader, Louise Harel, had expressed her intention to vote for the motion, but had reportedly declared it to be a “free vote”, leaving party members the option to vote against it. In the end, several Vision Montréal members chose to vote against repealing the bylaw.

François Limoges, a member of Projet Montréal, delivered a rousing denunciation of the bylaw. “[P-6] has taken power away from the judiciary branch and given it to the iron arm of the state, which has a role, but not this role,” he said. “The government’s role is to legislate, the judicial branch’s is to interpret, and the police’s is to apply the law. The police cannot do all three.”

What Limoges dubbed the “iron arm of the state” was out in full force the first night of the municipal council, arresting one protester and ticketing at least one other, for spitting on the sidewalk. The second night, the SPVM issued at least one ticket, for $437, to a protester playing a drum outside the doors of City Hall for its excessive noisiness.

When the anti-P-6 motion failed, the small crowd watching the livestream inside City Hall expressed their discontent by forming a blockade at the doors to the council room. They remained there for several minutes, chanting and singing about P-6.

And just moments after the vote, anti-P-6 activists who had been following the debate on Twitter were already posting calls to action to continue resistance.

“It doesn’t matter!” read a Tweet from the CLAC in French after it was announced that the motion had failed. “With 70 groups [who have signed our declaration] we’ll keep demonstrating without negotiating with the police.”