Bringing university into the real world

Applied research is slowly on the rise

“Of the 29 courses that I have taken, 27 required essays,” said Jonathan Glencross at last semester’s TedXMcGill conference, “and only 1 of the 29 required me to directly talk to anybody in the real world. Of 74 essays, 73 of them are collecting dust. I’ve never lived the change that I came in to [the university] to learn about.”

Many students share this frustration – we often come to university expecting to learn how to make a difference in the world, but much of our work never sees the light of day. McGill has often rejected the “how-to” sensibility. Want to effect change in the world? Join a club or volunteer for an organization. But don’t expect to do it through a class.

There are however, opportunities for involvement that some may not be aware of. Applied research is a broad term, but generally means research proposed by a student or an institution – be it a community group, non-profit group, or corporation. It means that your essay doesn’t just collect dust, but can make a change in the world around you. You’re helping the world and getting credits for it too.

Most students don’t know that systems are being put in place to facilitate applied research. Many professors are also becoming sympathetic to the idea, also known as community-involved research.

“There’s often this understanding that there’s a big disconnect between student-university life and academia and the real world,” said Caitlin Manicom, a QPIRG board member who sits on the organizing committee of this weekend’s Study-In-Action, a conference that, in her words, tries to “bring those two worlds together and give students a place to promote research that is socially useful.”

Applied research allows students to deal with real-world scenarios, which, according to Jaffe, will help students from all faculties search for job opportunities. “If you had one independent study that allowed you to specialize, it would offer you a competitive edge, you could sell yourself better to your employer.”

According to George McCourt, a McGill School of Environment professor involved with applied research, it also helps students learn better. “I think a better way of [teaching critical thinking] is having people do research projects as opposed to sitting in a classroom and being given a bunch of information.”

But the most important aspect of applied research is that it seems to empower students to make change that they otherwise wouldn’t be able to make. Lilith Wyatt, the administrator of the Sustainability Projects Fund (SPF), who also facilitates sustainability-oriented applied research, said, “the students that participate in that kind of research would have a chance to engage meaningfully in the campus and have an impact on it. And have a chance to not just read and learn about the kind of change you can make in the world theoretically but have a chance to do it and to see it. Some people call it campus as a living laboratory.” McCourt added,  “you can be a Don Quixote and joust at windmills or you can get inside that windmill and try and make change.”

Applied research is also valuable to the university. Often understood as “ivory towers,” the institution’s role in society can easily be discredited. That the university structure is becoming less recognized is increasingly clear from government funding cuts all over the world. McCourt suggested that more diversity in research and more community involvement could mean a wider recognition of universities’ importance. A logical way out of the funding crisis in education would be to prove that universities do make a difference. As it is, it seems that the large population of undergraduates are a wasted resource for the university.

Not only that, but the university’s massive structure makes it very difficult to do applied research. Manicom, who wishes she had done applied research before graduating, said that, “there are really interesting ways to do research at McGill but you have to really search them out … it’s really hard sometimes, it feels like you’re facing McGill University’s entire academic history, trying to break down those walls.”

According to McCourt this is because the university, as an 800-year-old institution, is still very conservative. “So much of what we’re seeing right now requires the taking down of barriers. The infrastructure of universities is still set up with significant boundaries between disciplines.” Manicom added, “I think that there’s often a tendency within academia to do research on behalf of a community without actually engaging with that community or without necessarily doing research that’s even being called for. But I think that it can be a really empowering thing to be doing research that people are asking to have done.”

Manicom explained that students initiated the community-University Research Exchange (CURE), for this purpose. CURE links community groups with students willing to do community-involved research, but who don’t know where to start, and offers information and resources for students to do so. It presents “different types of learning that aren’t always validated within the academic context.”

After her experience trying to get her own applied research approved, Jaffe does think that it takes a lot of effort to pursue, but warns against a flat-out critique of the structure of the university. “It takes a bit of organization on the student’s part as well. I think it would be a little bit myopic to blame the administration on not having enough options, because I think those avenues exist, you just really need to take the reins.”

It’s clear that awareness of applied research is on the rise, even though there are limited systems in place to support it. “I think it is on the increase,” said McCourt, “but it’s a slow process. Universities are big institutions. Big institutions don’t change quickly.” A different understanding of a university may be taking shape, but putting better systems in place for alternative types of research may yet take a while. A view of the university as simply a space for academic research and an assembly line of undergraduates may be giving way to an understanding that it does have responsibilities for the society in which it exists. 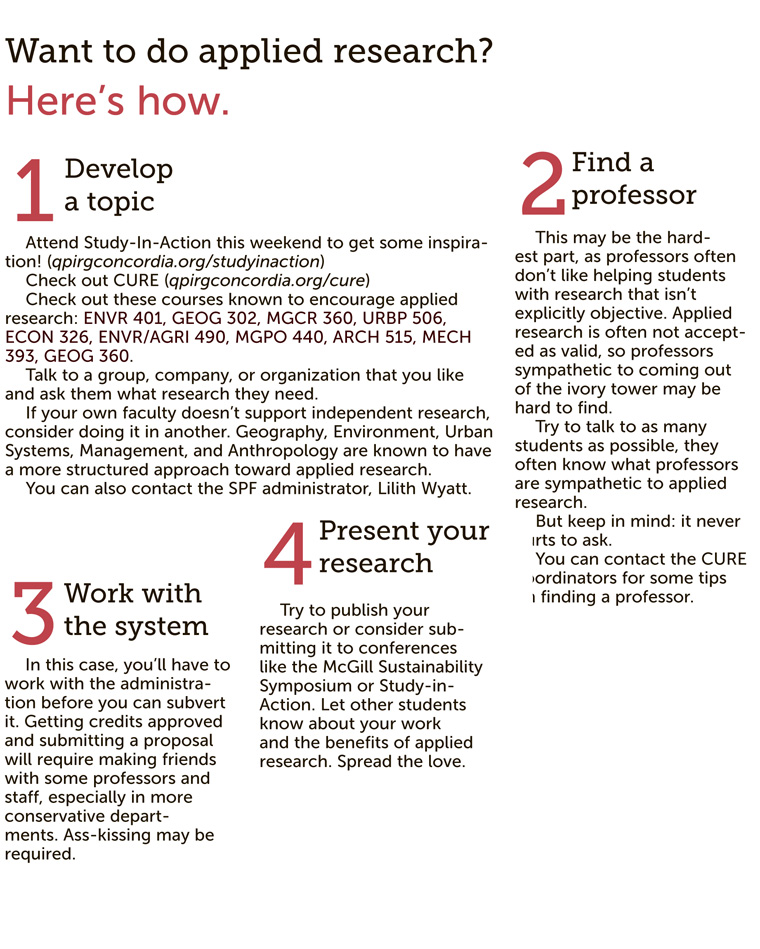